Color Me Obsessed: A Film About the Replacements 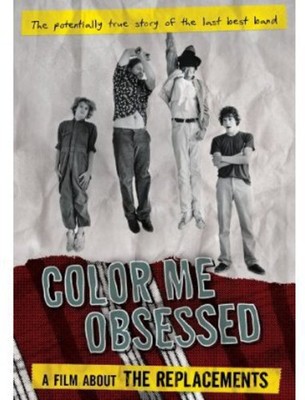 For some aging music fans and kids with a passion for musical history, the Replacements are rock and roll defined. This Minneapolis quartet took a teenage-punk attitude, threw it in a blender with classic and pop rock, and then poured it into a Middle American pint glass. Over the band's 12-year existence, it's live sets were magical, a total mess, or both-depending on your mood and the members' respective blood alcohol levels. Gorman Bechard's remarkable history of the 'Mats takes US from their first show as the Impediments to their 1991 onstage breakup in Chicago, and everywhere in between. Bechard bravely eschews including the band's music, photos, and live footage, instead relying solely on the fans: their well-kept memories, hilarious anecdotes, and differing points of views about the foursome's wildly varied discography and infamous antics. Bechard has recruited an impressive roster of influential fans: musicians such as Husker Du, Babes in Toyland, the Decemberists, the Hold Steady, Archers of Loaf, Titus Andronicus, and Goo Goo Dolls; writers such as Jack Rabid, Legs McNeil, Robert Christgau, Jim DeRegotis, and Greg Kot; and actors such as George Wendt, Tom Arnold, and Dave Foley. Sprinkled in among that esteemed group are the more mainstream fans, who often give the most insightful and heartfelt perspectives of all. Follower or not, after taking in COLOR ME OBSESSED, you'll be ready to run home, gather some 'Mats albums, and design a perfect soundtrack of your own.

Here's what you say about
Color Me Obsessed: A Film About the Replacements.