Katharine McPhee - Christmas Is A Time [To Say I Love You] 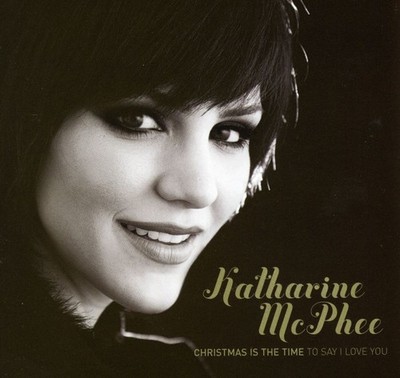 Katharine McPhee's career launched with her renowned run on "American Idol" in 2006. She has already enjoyed success with Christmas releases from her 2007 single "O Come All Ye Faithful" to 2009's "I'll Be Home for Christmas. " Now she has recorded some of her favourite Christmas songs for her third album titled Christmas Is the Time. To Say I Love You, to be released by Verve Forecast. "I know these songs so well. These are the songs I listened to growing up. Hopefully my versions will be unique, but at the same time timeless; full and rich yet simple and intimate. " the idea for this holiday album came about after the success of her first Christmas single, "I'll Be Home for Christmas," which was released last year. The song was a huge hit, downloaded over 500,000 times exclusively on iTunes. "I've been blessed to share Christmas with my family and close friends. Life on the road has made me realize how many people spend Christmas alone... These experiences inspired me to write an original song for the album called 'It's Not Christmas Without You. '" the producer of the album is Allen Sides, one of the most respected engineer/producers in music. A two-time Grammy winner for albums with Burt Bacharach and Joni Mitchell, Sides has also worked with Eric Clapton, Alanis Morrisette, Faith Hill, Mary J. Blige, Frank Sinatra, Ray Charles and Ella Fitzgerald. Co-producing the album is Grammy nominated producer/engineer/ arranger Steven Miller who has worked with the Dave Matthews Band, Pink, Suzanne Vega and George Winston to name a few. The title track of the CD, "Christmas Is the Time. To Say I Love You," is a rarely covered song originally recorded by rocker Billy Squier in 1981. The album will also be filled with familiar classics, whether traditional or contemporary, from "O Holy Night" and "This Christmas" to a medley of "Away in a Manger"/"O Little Town of Bethlehem" and "Have Yourself a Merry Little Christmas" featuring trumpeter Chris Botti.

Here's what you say about
Katharine McPhee - Christmas Is A Time [To Say I Love You].

1) Have Yourself a Merry Little Christmas
2) Jingle Bells
3) It's Not Christmas Without You
4) O Holy Night
5) Silver Bells
6) Christmas Is the Time
7) Medley: O Little Town of Bethlehem/Away in a Manger
8) What Are You Doing New Year's Eve
9) White Christmas
10) Who Would Imagine a King