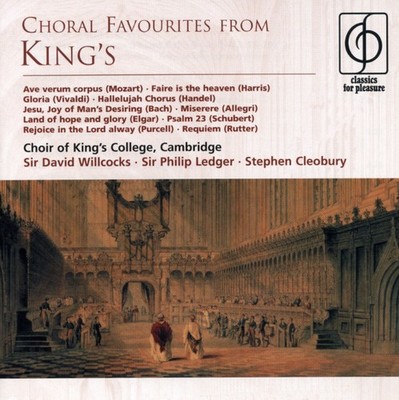 Choral Favorites From King's / Ledger, Willcocks, Et Al Release Date: 01/23/2007 Label: EMI Classics For Pleasure Catalog #: 75943 Spars Code: n/a Composer: Henry Purcell, George Frideric Handel, Johann Sebastian Bach, Franz Joseph Haydn, Performer: Osian Ellis, Ian Hare, Stephen Layton, Sir Philip Ledger Conductor: Sir Philip Ledger, Sir David Willcocks, Stephen Cleobury Orchestra/Ensemble: Academy of St. Martin in the Fields, Cambridge King's College Choir, New Philharmonia Orchestra, Number of Discs: 1 Length: 1 Hours 17 Mins. This is a well filled disc of choral favorites, spiced with a few lesser known pieces and bolstered by the imposing reputation of the Choir of King's College, Cambridge. The highlights of this disc include a dancing Bell Anthem from Purcell, a bright excerpt from The Creation and very pretty Gott ist mein Hirt. Only two contemporary composers, Britons John Tavener and John Rutter, are represented here, but both of their contributions receive committed and sensitive performances. The performance of the Tavener is particularly good - hushed and mystical. The Agnus Dei from Fauré's Requiem also has real character and intensity, as does the Delius aquarelle that follows it. There are also a few weak spots. The Allegri Miserere is given a pretty performance which lacks something in intensity and focuses more on those high Cs than on the meaning of the text of this psalm, David's plea for forgiveness after his adultery with Bathsheba. The Hallelujah Chorus also feels a little low voltage. Most of the album, though, is good without being spectacular. Mozart's Ave Verum Corpus receives lovingly gentle performance, as does Jesu, Joy of Man's Desiring, sung here in German. Tallis's motet, while sung sensitively, is so understated as to disappear between the more familiar Mozart and Vivaldi items that flank it. The programming of this disc is intelligent, with no jarring juxtapositions between the pieces, but enough contrast to maintain the listener's interest and stave off aural fatigue. All of the pieces included here are relatively short, which will also help listeners unaccustomed to classical music to enjoy the CD without becoming bored. I also like the choice of the last few tracks. The performance of Dykes' hymn is a bit ponderous, but the Harris, Wood and the Dykes items showcase what this choir does on a day to day basis as an integral part of a living, breathing Anglican chapel. And how better to finish off a disc celebrating an English institution than with a roof-raising rendition of Elgar's old chestnut? Turn the volume up and wallow in it! This compilation offers a decent overview of the life of the Choir of King's College, Cambridge over the last 35 years, under it's last three directors. You can certainly find better performances of some of the individual tracks included here, but these recordings are never less than fine and some are excellent. At the price, you are unlikely to find a better album of choral favorites. This would make a lovely gift for someone who enjoys classical or choral music but is relatively new to it. - Tim Perry, MusicWeb International

Here's what you say about
King's College Choir of Cambridge - Choral Favorites from Kings.