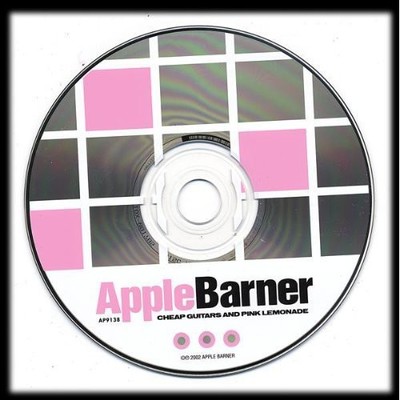 Apple Barner (present members) Laura Middleton (Stansell)- vocals Luke Martinez- drums Alan Plaep- guitar, vocals Jesse McDowell- bass Sergio Martinez- guitar, vocals Les Stansell- guitar (Past members) Danny Dedera- guitar, vocals David Figurate- bass Frank Martinez- harmonica, percussion Kelly Boyd- vocals Eric Cook- Bass Brian Dedera- guitar In the summer of 2000 Laura Stansell, Kelly Boyd, Danny Dedera, and Alan Plaep started laying down tracks for what would become 'Seeds' a five-song EP released under the name Apple Barner. The music was raw, beautifully simple, and gathered an enthusiastic response from listeners. 'Cheap Guitars and Pink Lemonade' Apple Barner's first full-length release continues with more of the same fresh sound. 'The album was kind of a fire drill to record,' says Alan. 'I think Laura did the vocals in two sessions, and Luke layed down the drum tracks in one day. We didn't want it to be perfect...we wanted it to be good.' Much of the credit for the Apple Barner sound can be attributed to the experiences of growing up and living on the extreme southwest coast of Oregon in the shadow of the Siskiyou Mountains. There is no underlying regional musical style such as those found in the deep south, farm country, or the inner-city. 'It's kind of a no-man's land down here,' states Luke Martinez. 'The rest of Oregon forgets about us, and we don't belong to northern Califonia. We just do our own thing.' Apple Barner sounds like, well, Apple Barner. The backbone is definitely rock, but with strong hints of blues, folk, and roots-rock. 'People always ask me what kind of music we play...and that's after they hear us,' says singer Laura Stansell. The best way to describe it is that Apple Barner plays music...period. More to come!!!