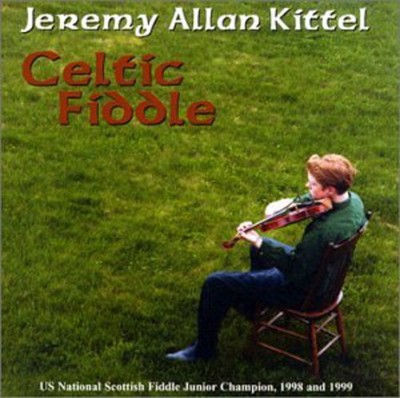 Debut album from an exciting young fiddler, grounded in traditional Scottish and Irish music. Jeremy won the US National Scottish Fiddle Championship in 2000, and was the Junior Champion the previous two years. He also qualified for the All-Ireland four consecutive years, and is a popular act at Scottish, Irish and Folk Festivals and concerts. Celtic Fiddle contains driving renditions of traditional and original Scottish, Irish, and Cape Breton Fiddle Tunes. On each track Kittel is accompanied by Charlie Wilkie, Guitar; Patrick Flannagan, Bouzouki & Guitar; Tim Sparling, Piano; or Jesse Mason, Guitar. 54 Minutes. Fiddler Magazine, Summer 2003 '[Jeremy has] established impeccable credentials for Scottish fiddling with his first album...' Sing Out, Fall 2003 'Still in his teens, Jeremy Kittel has already established himself as a world-class fiddler.' Bryan Kelso Crow, Celtic Connections National Syndicated Radio Program 'One of the top 20 Celtic albums of 2000, and certainly the best album by a new young artist.' Current Magazine, 9/2000 'His album showcases his talent in a well-chosen series of tunes, including the wonderful 'Tamlin' and the haunting 'Well May Charlie Wear the Crown.' Irish-American News, 4/2003 'At last year's festival Kittel brought the house down - one day after turning 18.' Valley News, New Hampshire, 12/12/02 'You'd think he had been playing for decades in Irish Music Halls. Kittel's fiddle style is utterly convincing; he has the characteristic driven-bow style of Irish and Scottish fiddling, the percussive cuts and rolls, down pat.'

Here's what you say about
Jeremy Kittel - Celtic Fiddle.