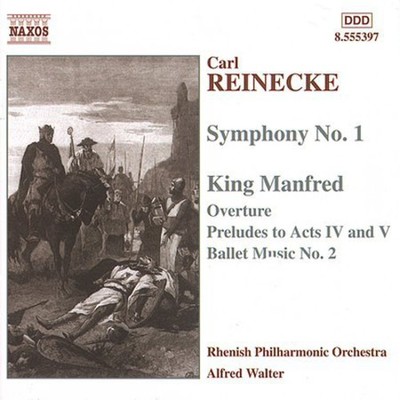 Reinecke wrote his Grand Romantic Opera in Five Acts, King Manfred, between April and December 1866 in Leipzig, using a libretto by Friedrich Roeber. The work received it's first performance on 26th July, 1867, at the Royal Court Theatre in Wiesbaden under the direction of Wilhelm Jahn and was published in 1868 by Breitkopf and Härtel. The opera deals with the fate of the war-like King Manfred of Sicily (1232-1266), an illegitimate son of the Hohenstaufen Emperor Frederick II, who had half Europe against him and fell in battle against Charles of Anjou. Reinecke chose this unfortunately Wagnerian subject in accordance with the taste of the time. Although critics of the day recognized the value of the work, it was to disappear from the repertoire within a few years. Only the splendid Overture and the Preludes were to retain a place until the turn of the century. The Overture is one of the most important works of Reinecke, constituting a character-sketch of Manfred, in the manner of Beethoven's Leonora, Schumann's Genoveva and Manfred and Wagner's Faust, rather than relying on the musical content of the opera. Here are all the ingredients of Romantic stage music, lyrical melodies for horn or cello, the sounds of the minstrel's harp, agitated running notes for the strings and massive chords for the brass, all handled with an assurance that makes it difficult to understand the present neglect of the piece. The Prelude to Act V deserves special mention. A short introduction presages the coming disaster, the death of Manfred, before a melodic line of lyrical intensity, a cogent demonstration of the creative power of the composer. It is with this music in mind that we may read Reinecke's assessment of his own achievement, in a letter to Ferdinand Hiller on his choral work Belsazar: "... you know that no brilliant, original inventiveness is at my disposal... , but I believe, nevertheless, that I have provided a thoroughly respectable piece of work, evidence of worthy endeavor, a passable command of form and good taste, perhaps also of good judgment".

Here's what you say about
Alfred Walter - Symphony No 1 / King Madfred.