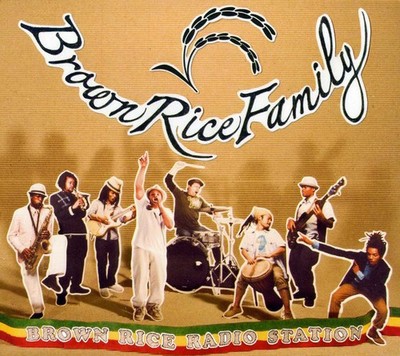 Brown Rice Family is today's freshest world roots band jamming towards global solidarity and organic happiness. Guided by a strong belief in the natural flow of things, BRF provides the masses with a distinctively organic World Roots Music, which encompasses jazz stylings, afrobeat, reggae, rock, Latin rhythms, hip-hop, and funk. The band was formed while it's members were attending the City College of New York. Initially, BRF started off with two members, Yuichi and former member Joe Jang, who both met while taking the same music class. Both shared many things in common, among them were music and healthy eating and living. Both shared the belief that one should live in a healthy environment and eat naturally grown food. While flirting with their organic approach to living and music, they came across brown rice---one of the healthiest foods for human consumption. This led them to envision molding a band deeply rooted in a strong foundation, a band that not only creates great music but also creates music that makes it's listeners feel alive. To make this connection between healthy living and music, they decided to name the band Brown Rice Family. The band began to grow and is presently comprised of eight members hailing from all over the world---Japan, Jamaica, Haiti, Nigeria, South Africa and USA. The members' diverse national backgrounds set the stage for their unique coexistence, their musical creativity and dance. The BRF sound is in the truest sense of the words, World Roots Music. The Brown Rice Family vibe is similar to Fela Kuti's, but if Bob Marley and Antonio Carlos wanted to get on board for a gig, they would. BRF's colorful sound waves will carry rhythm surfers on a musical journey that straddles ancient and contemporary global sounds. BRF takes a workshop approach when crafting their music. Each member's input is examined with an open mind by all members before it's placed in a musical frame for display. BRF firmly believes in self-improvement and environmental improvement, and so the collective is perpetually seeking out healthier ways of living, grooving, and eating. And this belief is not only in their music, it stretches out into the crafting of the band-made "Brown Rice Family soap". This soap is made of the most natural ingredients available from organic farmers and suppliers. This 'family' creates world rhythm driven music and dance that is nutritious for every age, gender, ethnicity, nationality, group, and occasion.