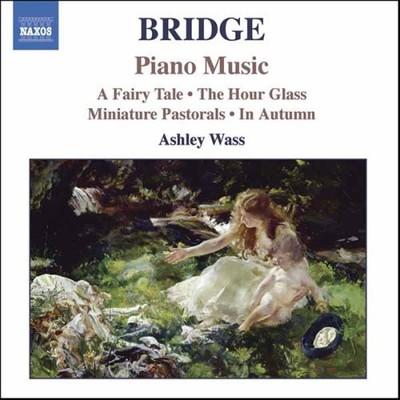 Frank Bridge studied violin and composition at the Royal College of Music where he was a pupil of Stanford from 1899 to 1903. Apart from composition his career embraced performance (he was the violist of several quartets, most notably the English String Quartet), conducting (he frequently deputized for Sir Henry Wood), and teaching, Benjamin Britten being his most renowned pupil. No other British composer of the first half of the twentieth century reveals such a stylistic journey in his music. His early works, like the First String Quartet (1906), the Phantasy Piano Trio (1907), and the orchestral suite The Sea (1910-11), follow in the late-Romantic tradition bearing a kinship with Brahms and Fauré; subsequently, in the orchestral tone poem Summer (1914), Bridge comes close to the orbit of Delius. After the First World War, however, his music became intense and chromatic as in the Scriabinesque Piano Sonata (1921-4). The radical language of the sonata was pursued in his chamber works of the 1920s, so that in the Third String Quartet (1926) Bridge rubs shoulders with the early works of the Second Viennese School. Also to this decade belong two orchestral masterpieces, Enter Spring (1927), and Oration for cello and orchestra (1930). These and later works, for instance, Phantasm for piano and orchestra (1931), and the overture Rebus (1940) languished, finding little favor either with public or critics, and despite Britten's advocacy, it was not until the 1970s that Bridge's remarkable legacy began to receive the attention it deserved. Composed in 1924 during the months immediately after the completion of the Piano Sonata, the two pieces comprising In Autumn are major achievements amongst Bridge's piano music. They clearly are written in the wake of the harmonic world Bridge had established for himself in the sonata: the mood of Retrospect is inward-looking, with bleak, lean textures and an extended somber chromatic melody which gradually rises inexorably to two dissonant climaxes. In a letter to his patron Elizabeth Sprague Coolidge, Bridge commented that he was particularly pleased with the piece. It's faster companion, Through the Eaves, is a fleeting vision shot through with rustlings and furtive movements.

Here's what you say about
Ashley Wass - Piano Music.