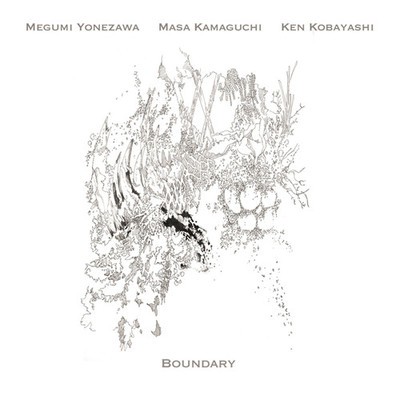 Japanese musicians Megumi Yonezawa, Masa Kamaguchi, and Ken Kobayashi present Boundary. The pianist and drummer live in New York City and often collaborate; the bassist lives in Madrid but comes to New York City twice a year for a month each time. The producer heard them at Manhattan jazz bar Tomi Jazz and immediately booked a session to capture their magic before Masa Kamaguchi left town. Megumi Yonezawa, from Hokkaido, earned multiple awards while studying performance and composition at Berklee, then joined Greg Osby's group on Jason Moran's recommendation and can be heard with him on the Blue Note album Public (2003). Other credits include work with David Liebman, George Garzone, Sam Newsome, and many more. In 2016 the Fresh Sound New Talent label released her debut album, A Result Of The Colors. But none of these credits reflect the freedom with which she plays on Boundary. Kamaguchi, also from Hokkaido, has the most recording credits (upwards of 30) in the trio, ranging from Ahmed Abdullah's Actual Proof (CIMP, 1999) to a series of tribute albums with Vinnie Sperrazza and Jacob Sacks. Inspired to play bass after hearing Jaco Pastorius albums, he studied with Gary Peacock student Yoshio Ikeda, then moved to Boston to attend Berklee, followed by a dozen years in New York City performing and recording with ESP star Sonny Simmons, David Murray, Charles Gayle, Paul Motian, Dave Douglas, Frank Kimbrough, and even Toots Thielemans. Kobayashi, who put the trio together, hails from Tokyo, where he earned a Bachelor's degree in art criticism and art history from Tama Art University. After moving to New York, he expanded his knowledge at the Drummer's Collective. He can also be heard on Jan (2014) with bassist Jochem van Dijk and Nine Stories (2016) with Takeshi Asai. Recorded at Park West Studios on June 4, 2017 by Jim Clouse. Personnel: Megumi Yonezawa - piano; Masa Kamaguchi - bass; Ken Kobayashi - drums. Cover art by Kiichiro Adachi. Liner notes by Matthew Shipp.