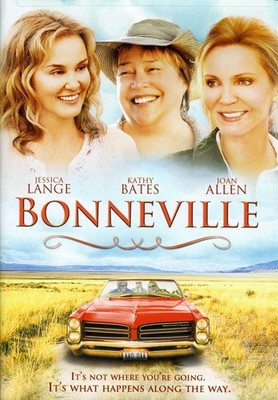 Writer-director Christopher N Rowley makes a strong directorial debut with BONNEVILLE, a different kind of road movie. After her adventurer husband, Joe, suddenly dies while they are in Borneo, a lonely and scared Arvilla Holden (Jessica Lange) returns home to Pocatello, Idaho, where her husband's daughter from a previous marriage, the snooty Francine Holden Packard (Christine Baranski), is waiting to bring her father's body back to Santa Barbara, California, and bury him next to her mother. But Arvilla has already had him cremated, so Francine makes a deal with her: If Arvilla will bring her husband's ashes to Santa Barbara in time for the funeral service, she will allow Arvilla to keep the house. However, Arvilla had promised Joe before he died that she would scatter his ashes to the wind. Director Christopher N Rowley Star Jessica Lange, Kathy Bates, Joan Allen, Christine Baranski, Victor Rasuk, Special Features: Widescreen - 2.35 Audio: Dolby Surround 5.1 - English Subtitles - English, Spanish Additional Release Material: Alternate Scenes - Unspecified Deleted Scenes - Unspecified Featurettes - 1. Behind the Scenes 2. Gag Reel 3. Red Hat Society Promo. Runtime: 93 minutes.

Here's what you say about
Bonneville.