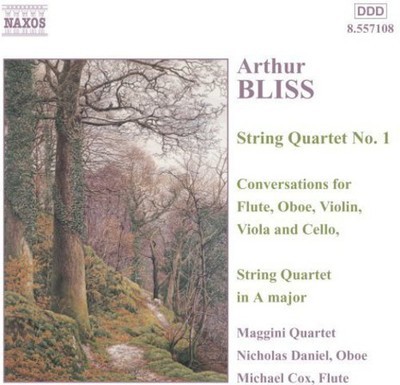 Bliss wrote his String Quartet in A major in 1915, during the Great War, and subsequently withdrew it, as he did other early works. The quartet was dedicated to Edward Dent and was performed in London in November of the year of it's composition. Bliss had always admired the music of Edward Elgar and received encouragement from him. On this occasion Lady Elgar wrote to Bliss, then serving in France, to tell him of the favorable reception of his work and her own appreciation of music she found 'full of eager life and exhilarating energy and hope'. The first movement seems at once to reflect current English musical trends, while suggesting in texture Bliss's early admiration for the music of Ravel. The second movement opens with a melody in the mode of an English pastoral folk-song in which instrument after instrument joins, in imitation. This is followed by a final Allegro vivace con grazia that broadly continues the same mood and textures, with melodies of modal contour, moments of contrapuntal interest, and the energetic spirit that Lady Elgar had observed and praised. The quartet was heard with relative frequency in the recitals of the Philharmonic String Quartet, in which Eugene Goossens, it's co-founder, played second violin. Conversations, scored for flute/bass flute, oboe/cor anglais, violin, viola, and cello, represents a new phase in Bliss's career. In Paris after the war he had met the group of young composers loosely banded together as Les Six, and Conversations was later played at the Aeolian Hall in London in a program that included works by Germaine Tailleferre, Poulenc and Milhaud, to be greeted by the severe strictures of the critic of the Daily Mail. The work was originally intended as a jeu d'esprit, given in a private performance by five musicians of some distinction, including the flautist Gordon Walker and the oboist Leon Goossens. The first movement, The Committee Meeting, finds the chairman, the violin, in a monotonous mezzo-forte, struggling to make his point, against the often irrelevant interruptions of others, in obvious dissent. In the Wood is gently nostalgic in character, with it's intermittent bird-song, a contrast to the following In the Ballroom, with it's jaunty violin melody first heard over the plucked notes of viola and cello, before the entry of the bass flute. At the heart of the movement, in which the oboe is silent, is a more sinister passage, introduced by the bass flute. The fourth movement is Soliloquy for cor anglais alone, the first section, which is repeated, frames a livelier central section. Conversations ends with In the Tube at Oxford Circus, a playful evocation of the turmoil and varying scene, the whole work a contemporary reaction to the preceding decade, but no longer as shocking as it seemed to some contemporaries.

Here's what you say about
A. Bliss - Chamber Music 1.