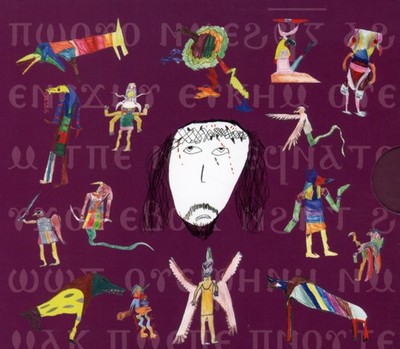 For anyone who has followed Current 93 even casually (most who do are obsessive), Black Ships Ate the Sky is a whole new thing on the one hand, and the culmination of what began in earnest on 1992's Thunder Perfect Mind on the other. Thunder Perfect Mind - a companion album to Nurse with Wound's release of the same name - set out wholesale to create intuitive and even gentle melodies for the density of David Tibet's cosmic thought. It did so beautifully and, for the time, very cohesively. Tibet and his ever evolving cast of players have built on this theme ever since, with varying degrees of success. It seems to come off best in the band's rare live performances - check out Halo, issued in 2004, as only one example. Black Ships Ate the Sky is a song cycle. It's centerpiece is the shape note hymn "Idumea" (written by Charles Wesley in 1763), which was also used in the soundtrack of the film Cold Mountain. Idumea is in the country of Seir, inhabited by Edomites, the descendants of Esau; it's story is rooted in Genesis and is picked up in Isaiah, where God pronounces great judgment on the "land of Idumea." the track is sung eight times by as many singers. It is central to Tibet's theme of Black Ships Ate the Sky, where judgment, redemption, and a the aftereffects of apocalypse are already here, have been here, and are yet to come. Marc Almond opens the album with his gorgeous and mournful rendition, and it's opening words "And am I born to die?/To lay this body down!/And must my trembling spirit fly/Into a world unknown?" perfectly sets up Tibet's "Sunset (The Death of Thumbelina)," where he first introduces the passing of innocence, exile in the modern world, and the dark vision where "Black Ships Ate the Sky," the place in darkness where God was not present. John Contreras' cello and Joolie Wood's violins underscore the notion. It's not paranoid; it's mournful - a gentle acceptance of apocalypse as not only the death of innocence (i.e., Thumbelina) but also the setting of the sun on life as it is. The title track follows, and the odd-key acoustic guitars - played by Michael Cashmore and Ben Chasny - reveal the new, terrifying vision as it is being experienced in the moment, in the now, all of it in increasing horror. Cashmore and Chasny get louder as Tibet begins to rant: "The old gray mare is dead/She died in the pantry/Whistling for dead Dixie/A black ship sucked her soul/And took her to that good old time/Armageddon music/Eclipsed by words/I woke up this morning/With pieces of my mind...." It's about the death of symbols as guiding principles. A slide guitar snakes around the background, pointing it's way into the darkness. These notions continue in "Then Kill Caesar" before Bonnie "Prince" Billie enters with his own rendition of "Idumea," accompanied by a droning sarod and his banjo, skeletally winding around that mournful, cracking Appalachian voice and the occasional sound of his foot on the floorboards. He's singing from the place Tibet described, looking for the link between antiquity and the future, all of it looking into the maw of death. The other versions are striking as well. There's Baby Dee's, where she's beautifully accompanied by harp and cello; Antony's a cappella reading with multi-tracked vocals (his own); Clodagh Simonds' gorgeous Celtic reading with harmonium and melodica; Cosey Fanni Tutti's, which is fused to Tibet's recurring "Black Ships" theme - as the blind protagonist guides them home and states that "all the gospels are true," referring to everything from pussy cats to Lazarus, Maranatha, Jesus, and dozens of other things. It's a long tune, and Tibet rants yet more gorgeously poetic lyrics in a long sequence where he becomes both pariah and the blessed, all encased in a human but simultaneously celestial body. Sound collage with cellos and backmasked vocals take over until Tutti, calmly and plainly, sings the lyrics to take it out accompanied by a dr.

Here's what you say about
Current 93 - Black Ships Ate the Sky.