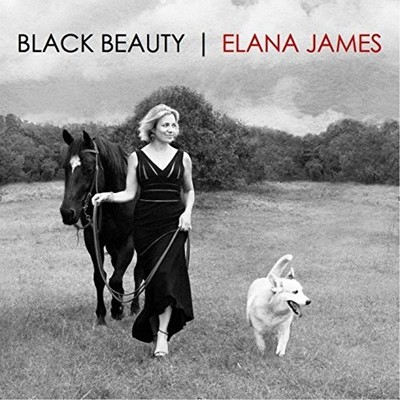 ALBUM REVIEWS From Bentley's Bandstand (January 2015) by Bill Bentley: ELANA JAMES BLACK BEAUTY 'For the woman who is one of the cornerstones of Hot Club of Cowtown to jump off the deep end of moody bohemia and musical exploration is music to the ears of Elana James' many followers. Right on time to boot. She is one of the youngest members inducted into the Texas Western Swing Hall of Fame. By taking that talent and putting it into the mix on songs by the Grateful Dead, Bob Dylan (whose band James was a member of in 2005), the Hollies and Woody Guthrie, as well as her appealing originals, she becomes a much-needed detour on the Americana highway. It would be a mistake to expect any less from someone who went from Prairie Village, Kansas to graduating cum laude with a degree in Comparative Religion from Barnard College. The way that Elana James balances her rural background with big city smarts for a rich and surprising sound is the real beauty of Black Beauty. Both influences are pervasive throughout each song, but their blend turns everything into a personal glimpse of what assimilation can be. There's even a song that features a word-for-word final letter home to his wife from US Staff Sgt. Juan Campos, who died in Iraq in 2007. There hasn't been anything quite like this before, and in putting it to music Elana James has shown the world a glimpse into eternal love. Forever.' HISTORY Best known for her work as a driving force behind globetrotting Western swing/hot jazz trio Hot Club of Cowtown, violinist, singer and songwriter Elana James is an internationally acclaimed artist in her own right. Black Beauty is her second solo album. Featured at countless festivals worldwide with the Hot Club of Cowtown and under her own name, James continues to build upon a musical adventure that has taken her from her home in Prairie Village, Kansas, to Columbia University in New York, where she played for tips in the subway, to northern India where she first studied improvisation, and to the mountains of northern Colorado and Montana where she continues to wrangle horses and work pack trips when not on tour. Since 1998 James has toured and recorded nine albums with the Hot Club of Cowtown, as well as released an acclaimed solo album of her own ("Elana James"). In 2005 she became the first woman to join Bob Dylan's band as a dedicated instrumentalist in 30 years, and in 2006 James opened Dylan's North American summer stadium tour. James has been a repeat guest on a Prairie Home Companion, is one of the youngest members ever to be inducted into the Texas Western Swing Hall of Fame, and was a final nominee in the Western Swing Female category in the first-ever Ameripolitan Music Awards (February 2014). QUOTES: "A beautiful voice, a fantastic musician, with the heart and soul of an angel." -Willie Nelson "An infectious combination of verbal wit and instrumental guile." -NPR "The First Lady of the Fiddle." -Rolling Stone (Australia) 'James handles vintage songs with great assurance... delivered without a hint of tiresome post-modern irony.' -Clive Davis, The Times (London) 'Elana is one of the sexiest, most talented musicians. Her style hints of another era... taking you places you thought were unreachable by today's standards. And yet, here she is... ' -Raul Malo (The Mavericks) "Elana James' throaty violin solos arrived in terse, epigrammatic phrases with a sprint, every so often, into chromatic harmony. She also sang in a breathy, un-self-conscious voice that made every double-entendre seductive." -Jon Pareles, New York Times 'The First Lady of the Fiddle' - Rolling Stone (Australia)

Here's what you say about
Elana James - Black Beauty.