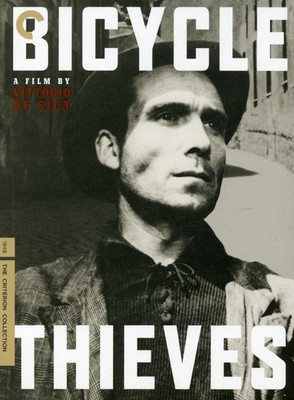 The recipient of international acclaim, Vittorio de Sica's Italian Neorealist masterwork, THE BICYCLE THIEF, is a treasure of world cinema. After nearly two years of unemployment, Antonio finally finds work posting bills. But he needs a bicycle to do the job. Unfortunately, he was to pawn his own bicycle long ago. In a humbling, tragic scene, Antonio exchanges his family's linen for his bicycle. But when the bike is stolen on his first day of work, he must comb the streets of Rome in search of the bike: his family's only means to survival. After three days of hunting, Antonio and his son, Bruno, find the thief, but witnesses or evidence, the police are unwilling to help Antonio. Hopless, Antonio and Bruno wander aimlessly through Rome, landing outside of a soccer stadium, where hundreds of bicycles are parked. His will broken, Antonio attempts to steal a bike but is caught in the act. Director Vittorio de Sica Star Enzo Staiola, Lamberto Maggiorani, Lianella Carell Special Features: Full Frame Format, Documentary, Featurettes 89 Minutes.

Here's what you say about
Bicycle Thieves (Criterion Collection).