Cantinero - Better for the Metaphor 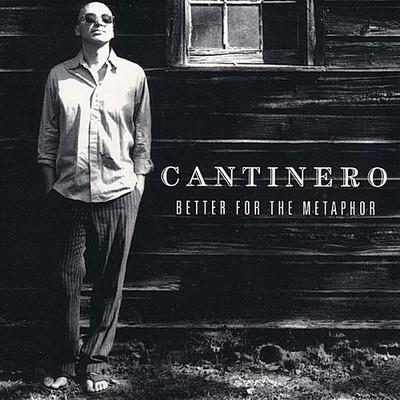 An immediate contender for the hearts of discerning indie music fans around the world, British-born, New York-based alt-pop singer/songwriter/composer Chris Hicken-better known to his growing legion of fans as Cantinero-entered the highly competitive fray in 2004 with Championship Boxing, his critically acclaimed Artemis/V2 Records debut. British music bible Q magazine praised it as 'a winning fusion of strummed acoustics and brawny ballads' with 'deliciously poignant lyrics.' The album hit the Top 40 on Amazon.com and top 20 at CMJ/Triple A Radio, was featured on National Public Radio's 'All Songs Considered' and an 11-minute special on NPR's "Weekend Edition". The Video for Single "Make Me An Offer" received multiple spins on MTV. Taking the gloves off once again, Better For The Metaphor is a witty and incisive pop affair that displays the multi-talented Hicken's talent for keenly observed insights as he cleverly chronicles the complicated world around him. Better for the Metaphor offers takes on such provocative themes as the American sense of entitlement ('Go Getter'), the manufactured culture of fear ('Safe'), and the dangers of trumpeting one's rigid ideology ('My House'). Hicken also serves up a 50s style duet on the ambivalence of the Universe ('Goodbye Life') and even a sing-songy ditty about using anti-depressants to make the pain of life go away ('Medicated'). Hicken, who also produced the album, layers his soulful tenor atop a rich blend of acoustic and Spanish guitars, piano, strings, bassoon, and random snatches of sound he's been collecting since he began to write the album in September 2005, when he relocated from Manhattan to a secluded log cabin in the Catskill Mountains. He recorded the album over a 12-month period with the help of a host of top musicians, whose previous employers had included: Frank Sinatra, Stevie Wonder, James Brown, Lambchop and Britney Spears. About Chris Hicken: A native of Birmingham, England, Hicken arrived in America in 1993 with the Alternative-Rock group Bigmouth. When the group dissolved, Hicken spent seven years working as a bartender in New York City's East Village (hence the moniker 'Cantinero,' a nickname bestowed on him by a Spanish co-worker) before deciding to give music another try. Seven of his songs are featured in the hit PBS TV series Roadtrip Nation. Hicken has worked with Blue Man Group and he was the only outside artist opening for Steve Earle on his recent tour. Hicken is a regular contributor to the Huffington Post. He lives in upstate New York with his wife and two dogs. Better For The Metaphor is available now on Tinkle Tone Recordings. For more info please go to cantinero.com.

Here's what you say about
Cantinero - Better for the Metaphor.