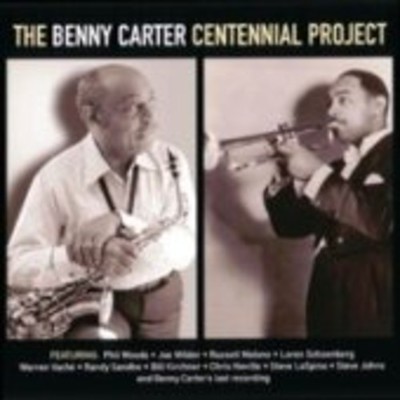 Evening Star Records, the label Benny Carter helped found in 1992, has released an all-star Carter tribute CD on the occasion of his 100th birthday. The multi-instrumentalist / arranger / composer, who died on July 12, 2003, was born on August 8, 1907. The new CD features many artists who worked closely with Carter during his final years. The nucleus of the project is the "Benny Carter Trio"-Carter's last working regular section: Chris Neville (piano), Steve LaSpina (bass), and Steve Johns (drums). Neville was perhaps Carter's closest musical associate during the last decade of his performing career. LaSpina is on several Carter CDs and both he and Johns toured with the saxophonist in the U.S., Europe, and the Far East. The project features several special guests who were friends and associates of Carter: trumpeters Warren Vaché, Randy Sandke, and Joe Wilder, saxophonists Phil Woods, Loren Schoenberg, and Bill Kirchner, and guitarist Russell Malone. Although the recording revisits a couple of Carter's classic melodies and two of his arrangements, it's purpose is not re-creation, a process Carter assiduously avoided. Carter retired from public performance in 1998 but he never stopped creating music, and the CD concentrates on his later pieces-some never recorded. The exceptions include two of his most celebrated arrangements for saxophone section: "I'm Coming, Virginia" (1938) and "All of Me" (1940), interpreted by a sax ensemble led by Loren Schoenberg. Carter's big band theme song, "Melancholy Lullaby" (1939), is played by Bill Kirchner on soprano saxophone, and the undeservedly obscure "Fable of a Fool" (1939) receives a solo piano interpretation by Chris Neville. Randy Sandke and Warren Vaché revive "I'm in the Mood for Swing," a Carter swing anthem from 1937, while Vaché is featured on the standard "Key Largo" (1947). The later material includes two pieces drawn from extended works premiered by Carter in 1996; "Other Times" (from Echoes of San Juan Hill) is played by Phil Woods (in duet with pianist John Coates), and Joe Wilder reprises "The Blessing" from Peaceful Warrior, a suite in memory of Dr. Martin Luther King. Other recent pieces recorded for the first time here are the ballad, "Again and Again" (played by Randy Sandke) and a waltz, "Angeline" (played by Loren Schoenberg). The final track, "All About You," was one of Carter's very last compositions. He gave it to Russell Malone when the guitarist visited him at his home in 2001. A few months later, Carter recorded a solo piano version in his living room on his Bösendorfer. For this project, Malone performs a solo guitar version of the piece, segueing into Carter's own piano rendition, which turns out to be his last recording. In 1987, Benny Carter established an endowment at the Institute of Jazz Studies at Rutgers to honor the memory of Morroe Berger, his friend and biographer. Over the years, the Morroe Berger - Benny Carter Jazz Research Fund has provided stipends to more than fifty jazz students and scholars enabling them to pursue a variety of research projects. All proceeds from the sale of this CD will be donated to this fund. REVIEWS: 4 1/2 Stars -- Ken Dryden, All Music Guide Amazingly, although the players span a range of generations, instruments, and styles, everything here sounds so much like Carter's music that it's easy to picture him playing on every track... The CD closes with Carter's last recording, a piano solo on an apparently new tune titled 'All About You,' recorded in 2001 when the composer was 94. Now released for the first time, it is here preceded by a new guitar solo from Russell Malone (who phrases it somewhat like Eddie Lang's 1927 waltz 'April Kisses'). In both statements, the piece is beautiful, sweet, and simple - a perfect coda for the career of an understated jazz giant.-- Will Friedwald, NY Sun Taken in total, the album, the proceeds of which benefit the Morroe Berger-Benny Carter Jazz Research Fund to benefit students of jazz, is a reflection of the man himself; unpretentious yet moving with a great deal more depth than most folks realize. It's totally enjoyable from start to finish. --RUSS SHOR, VJM [The musicians] show through the force of their playing genuine fondness for Carter's joyous music, enlivened by their memories of his generous and humble personality. -- Bill Donaldson, Jazz Improv NY, October 2007.