Aaron Germain - Before You Go 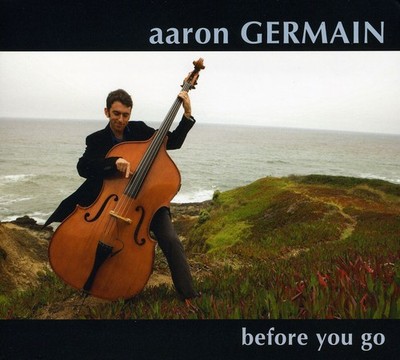 Spending 15 years as a busy hired gun bass player, Aaron has been through all sorts of adventures; traveling the world and learning from the masters. This album displays his wide range of music experiences. Growing up in Massachusetts, he cut his teeth playing upright and electric bass in bands ranging from jazz, blues, funk, reggae, Senegalese mbalax; all while driving to New York and Boston, and all over New England. From the beginning he learned to be picky about quality, but not genre. When there is that much amazing music to be played, there should be no reason to specialize. Moving to the San Francisco bay area in 2000, his adventures continued, and he quickly found himself working over time, sometimes playing two or three gigs a day. He entered the world of salsa and Afro-Cuban music, Brazilian forro music, Caribbean steel pan music; he found himself accompanying Indian kathak dancers, veteran calypso singers from Trinidad, or navigating through dense, odd-meter jazz compositions. On this album, all of these influences can be heard in the ten original compositions and the manner in which they are played. The trained ear will enjoy the shifting meters and innovative melodies, but for someone who wants to just relax and listen to good music, it will prove equally palatable the ear. Over the years Aaron has performed with artist such as Yusef Lateef, Stanley Jordon, Andy Narell, Bonnie Raitt, Francisco Aquabella, John Handy, Melba Moore, Mary Wilson, Paula West, Jacqui Naylor, Dwight Trible, Eddie Marshal, Dave Ellis, Babatunde Lea, Gordon Stone, Kenny Washington, Josh Jones, Akira Tana, Jamie Davis, Royal Hartigan, Mike Clark, among many others. He has performed at venues such as, the Blue Note (in NY), Scullers, The Blues Alley, Yoshis SF, Yoshis Oakland, The Fllmore, Dakotas, The Iron Horse, Herbst Theatre, Kuumbwa, the House of Blues, ect. He has performed many places around the world, including a world music festival in front of the great pyramids of Egypt in december of 2009. Musicians: On all tracks except 'Deep Breath' and 'Bellabou Baiao': Aaron Germain: Acoustic Bass Bryan Bowman: Drums Matt Clark: Piano Sheldon Brown: Tenor Sax Matt Heulitt: Guitar (on 'Wrong Way Blues') On 'Deep Breath': Aaron Germain: Electric Bass Jeff Marrs: Drums Matt Clark: Keys John Gove: Trombone Derek Smith: Vibraphone On 'Bellabou Baiao': Aaron Germain: Electric Bass Phil Thompson: Drums Brian Rice: Percussion Ricardo Peixoto: Guitar Sheldon Brown: Clarinet Adrian Jost: Accordion Colin Hogan: Accordion.

Here's what you say about
Aaron Germain - Before You Go.