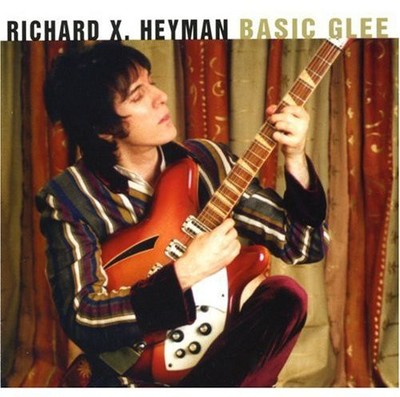 Ladies & Gentlemen -- Introducing the Artist Currently Unknown as Richard X. Heyman. Well, that's not exactly true. RXH has a legion of fans who eagerly anticipate each new release and live performance in their particular part of the planet. It's just that some music lovers are still in the dark about this sensational singer/songwriter/multi-instrumentalist. After four critically acclaimed albums, Heyman is overwhelmingly regarded by those in the know as the premiere purveyor of pure pop pleasure. Now, with the completion of recording his fab fourth, 'Basic Glee,' RXH should receive the mass recognition he so rightly deserves. If you aren't familiar with RXH, here is a mini-micro-bio. Richard kicked off his musical odyssey at the tender age of five, astounding family and friends, by sitting behind a drum kit and launching into a Gene Krupa-style solo. From then on it was a nonstop singin', strummin' safari. The piano, guitar, bass, singing, and ultimately composition were all targeted and tamed. The influences soaked up were as varied as Bernstein to The Beatles, Richard Rodgers to the Rascals, and the Blues to the Byrds. 1986 saw the debut release of 'Actual Size,' a six song EP including the song 'Hoosier,' which was covered by Peter Noone of Herman's Hermits fame. (That recording has now been released as part of Heyman's disc 'Heyman, Hoosier & Herman.') In 1988 'Living Room!!' came out and was the first DIY home recorded album to be reviewed by Rolling Stone. Their rave led to Heyman signing with Cypress/A&M, who re-released 'Living Room!!' to an appreciative audience of lovers of melodic pop. Sire/Warner Bros. President Seymour Stein heard the song 'Call Out The Military' on New York's WDRE, called Richard at home and offered to put out his next effort. The result was the now classic 'Hey Man!' which Stereo Review cited as Album of the Month. Heyman fans were again delighted with the wealth of tuneful tracks. 'Cornerstone' burst upon the scene in 1998, garnering stacks of praises from the music press, a featured interview in Goldmine magazine, as well as another Album of the Month in Stereo Review. It was chosen as one of the Top Ten of 1998 in the Billboard Critics' Poll, and described by Stereo Review as 'a perfect little pearl of a record...a fount of feeling that's rare in this age of cynical self-containment fairly gushes from him.' Rolling Stone Magazine described Heyman as 'at the height of his creative powers' and 'an undiscovered treasure,' and Goldmine proclaimed that he is 'a rock'n'roll savior, one who's carefully absorbed the influences of many a forebear and crafted a sound so affecting and engaging it ought to be required listening for radio programmers everywhere.' In 1999, 'X-Posures' was released, a collection of rare performance footage and videos for the songs 'Cornerstone,' 'Falling Away,' and 'Call Out The Military,' among others. 2001's 'Heyman, Hoosier & Herman,' featuring Peter Noone on 'Hoosier,' had Rollingstone raving 'hooks galore and ebullient melodies, and lyrics revealing the emotional power that pop can pack into it's brevity.' On the live front, Richard leads his own band on guitar and keyboards. Along the way he has found time to lend his amazing drumming skills to such great artists as Brian Wilson, Link Wray, Jonathan Richman and the Left Banke's Michael Brown, composer of Walk Away Renee. He also played keyboards for the legendary Ben E. King. And now 'Basic Glee' is here at last! Turn-Up Records is proud to announce the release of Richard X. Heyman's new album 'Basic Glee,' consisting of fourteen stellar tracks exemplifying Richard's top-notch songwriting and uncanny ability to sound like a full rock band all by himself. On this first effort to come out of Richard's home studio, Tabby Road (named in honor of his and wife Nancy's many felines), he plays the (pardon the pun) lion's share of the instruments and sings nearly every vocal part (and there are lots of them). The results run the gamut from soul balladry ('Wishful Thinking') to alt-pop ('Hand Prints') to his inimitable brand of straightforward heart-piercing pop ('Pauline,' 'Vantage Point High,' 'Everywhere She Goes') -- every song a mini-masterpiece from the best songwriter in the country today, Richard X. Heyman. Says David Wild (contributing editor, Rolling Stone and host of Bravo's 'Musicians') about Basic Glee: 'Though thoroughly modern and fresh in it's sonic approach, 'Basic Glee' offers glorious echoes of a shining moment when rock music was reaching towards the glee of greatness on a daily basis...Richard is an artist driven by more than the search for a hit -- he's someone who's personally obsessed and intimately connected with the power of rock & roll in our lives. Music is more than a career to this guy -- it's a lifelong passion. And that's why his blood is all over these tracks...when it comes to those priceless seconds of musical pleasure brought to us by a true rock artist like Richard X. Heyman, glee is not simply basic. This sort of glee is downright infectious.'

Here's what you say about
Richard X. Heyman - Basic Glee.