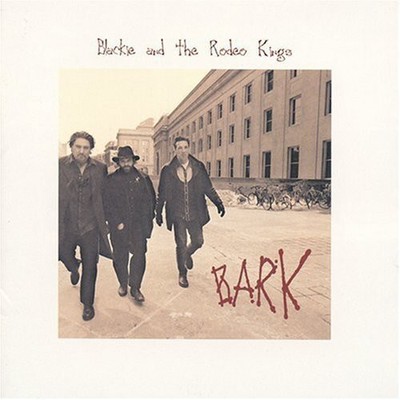 In 1996 their debut album was released to critical acclaim.The first album, High or Hurtin', brought 14+ Willie P. Bennett originals to an appreciative audience. The musicianship is superb, the vocals right on, and the lyrics are sublime. All three continued their successful solo careers garnering numerous individual awards and nominations. The chemistry, which first brought the trio together, drew them back in 1999 for Kings of Love, a double album of originals and covers, folk,rock, ballads, even surf instrumental : an amazing achievement from Colin, Tom and Stephen which won the JUNO in the Best Roots & Traditonal Album, Group category. BARK is the third album and marked the highly anticipated return of the Juno Award winning group Blackie & the Rodeo Kings. BARK, recorded in the winter of 2003, found the trio maturing musically, featuring some of the best material that these three talented songwriters had ever put to disc. Since Kings of Love, Stephen, Colin and Tom have often found themselves writing songs that could only be expressed through the Blackie & the Rodeo Kings medium. It was this material and a love for collaboration with each other that brought them together for a third time. As they began work on BARK, they found that Blackie meant more to them than a simple and fun way to pay tribute to the music that they loved. In the 3 years since the release their Juno nominated recording BARK, Blackie & the Rodeo Kings been very busy. They appeared live on the Juno and the CCMA Award shows; toured across Canada with country legend Merle Haggard, toured the U.S. on the heels of a top 15 Americana radio hit and all three founding members (Stephen Fearing, Colin Linden and Tom Wilson) released solo CDs. BARK garnered the band 4 singles, 2 of which went top 30 at Rock Radio. Earlier this year the band went into the legendary Bearsville Studio with long time collaborators Richard Bell (keyboards), John Dymond (bass) and Gary Craig (drums) to record their fourth album. Added to the mix were guest appearances from Garth Hudson (the Band), Daniel Lanois, Pam Tillis, Malcolm Burn, Wayne Jackson and John Wynot. The sessions went so well, were so creative and fun that they ended up recording 29 songs, too much for just one CD. As a result, Let's Frolic, released September 12, will be followed-up with Let's Frolic Again sometime in early 2007. Let's Frolic features stellar yet soulful playing, superb songwriting and heartfelt vocals. "House of Soul" is a Daniel Lanois penned song which he handed over to the band with one request, which was to make him cry. Reports are that he was brought to tears when he heard it. The band got an assist on the Hi Records inspired "I Give it Up Everyday" from the Memphis Horns' Wayne Jackson. Pam Tillis's angelic vocals perfectly compliment Stephen Fearing on "The Fools Who Can't Forget". Other standout tracks include "That's What I Like", "Lovin' Cup", "Let's Frolic" and "Silver Dreams".

Here's what you say about
Blackie & the Rodeo Kings - Bark.