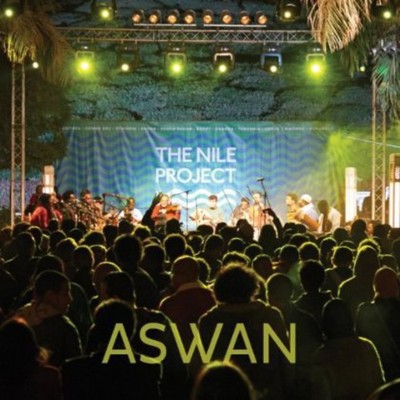 The Nile Project is proud to announce the release of it's first album, Aswan, named after the Egyptian city where it was recorded live at the collective's debut performance in January 2013. The concert was the culmination of a ten-day residency that brought together 18 artists from Egypt, Ethiopia, Eritrea, South Sudan, Sudan, and Uganda to collaboratively compose, perform, and record a new body of songs inspired by the Nile Basin's diverse musical traditions and instruments. For millennia, the Nile has nourished lands of human, ecological, and cultural beauty. Connecting the polyrhythmic styles of Lake Victoria and the pointed melodies of the Ethiopian highlands with the rich modal traditions of Egypt and Sudan, the 4,200 mile river yields an enormous range of songs and dances, expressing stories, emotions, and daily life. The Nile Project intertwines these traditions into a new, unified sound. A powerful pan-Nile percussion section drives the collective, which reunites traditional instruments of common ancestry while merging new ones. The plucked harp (lyre) and spike fiddle have been at the heart of the Nile's musical identity since ancient times. Today, modern versions of both instruments are found in every country within the Nile Basin. On Aswan, the lyre is represented by the Sudanese masenkop, Ugandan adungu, and Egyptian simsimiya and tamboura, while the spike fiddle manifests as the Ethiopian masenko and Ugandan endingidi. In curating the collective, co-producers Miles Jay and Mina Girgis sought to highlight the unique timbres of these instruments, while also surrounding them with complementary sounds from their respective traditions, including the Ethiopian saxophone, Egyptian ney, oud, and violin, and the bass guitar. The collective's six vocalists sing in 11 different languages on Aswan. Their lyrics range from the deeply personal to the party anthem, exploring themes of identity, regional solidarity, intercultural relationships both between and within their respective homelands, their local music scenes, and living in the diaspora. Founded by Egyptian ethnomusicologist Mina Girgis and Ethiopian-American singer Meklit Hadero in 2011, the Nile Project inspires, informs, and empowers Nile citizens to work together to foster the sustainability of their shared ecosystem. With it's power to promote dialogue, change perceptions, and inspire action, music is the Project's natural starting place. By exposing local audiences to the cultures of their river neighbors, the initiative's music provides a space for audiences to learn about each other and create a shared Nile identity. Building on this awareness, the Nile Project is developing educational programs, an online dialogue platform, and a Nile Prize to incubate innovative solutions to the region's cultural and environmental challenges. Aswan was commissioned by Lincoln Center for the Performing Arts for Target Free Thursdays at the David Rubenstein Atrium and received generous support from Swiss Development Cooperation, the U.S. State Department, the Association for Performing Arts Presenters, and Red Bull Media.

Here's what you say about
Nile Project - Aswan.