Julie Rivers - As Far As the Heart Can See 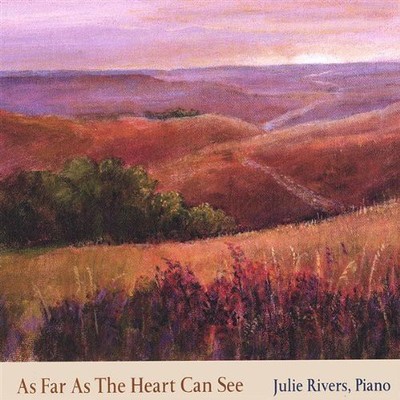 Julie Rivers Biography With the EarthStar Recordings 1997 release of her third album, 'One Starry Night,' pianist/composer Julie Rivers captured the hearts of new and old fans alike with her luxuriantly romantic music of the night. February 1999 saw the world premier of 'The Kiss of the Sun,' much-anticipated sequel to 'One Starry Night,' which celebrates the dazzling romance of the day. Her sixth recording, 'Christmastide,' was released in November, 1999, and her seventh, 'As Far As the Heart Can See' came in February, 2003. New Age Voice Magazine featured tracks from 'One Starry Night' and 'The Kiss of the Sun' in their Nov/Dec 1999 and May 2000 CD Samplers included in the mailings of the national publication. Her music has been in the Airwaves Top 100 of NAV Magazine, with airplay on stations from Cambridge, MA to Florida, New Hampshire, Wisconsin, Ohio, Kentucky, Tennessee, Hawaii, and many more. Radio Kansas recently selected three of her original albums for their popular new age program, 'Nightcrossings,' and two of her albums were listed simultaneously on the Hastings Books Music and Video 'Top Ten.' A feature story about Julie appeared in the Fall 1999 edition of 'Bryggen Magazine,' Sweden. Julie Rivers is one of seventeen pianists selected nationwide for a recording commemorating and benefiting the families of the victims of the 9/11 tragedies. The HeartAid Project released the CD including Julie's composition, 'When the Sun Goes Down,' from the album 'The Kiss of the Sun' on the Spring Hill label on 9/11/2002. In April 2002, it was announced in San Francisco that Julie won first place in the nation in the National League of American Pen Women composition contest with music from her recording, 'The Kiss of the Sun.' In April 1998, she had won first place in the same contest in St. Petersburg, Florida, with music from the CD 'One Starry Night.' She won two other national first places in the same contest in 2006 and 2008.She was recognized by the Kansas Arts Commission with one of four state Fellowship Awards for composition and has received special awards from ASCAP 1998-2010. Called a 'treasured Kansas artist' by Linda Graves, First Lady of Kansas, pianist Julie Rivers has been on the Kansas Musical Artists Touring Program each year since 1980. She is also a pianist for the fifteen-state Heartland Arts Fund roster of touring artists, and has performed with the Texas Touring Program and the Mid-America Arts Alliance. A graduate in Piano Performance from the University of North Texas, Julie has performed with the Saint Louis, Dallas, Oklahoma, San Angelo, Abilene (TX), Lawton, North Arkansas and Topeka Symphonies, among others. She has performed at the Texas Round Top Festival and the Oregon Bach Festival, in addition to many regional touring engagements.

Here's what you say about
Julie Rivers - As Far As the Heart Can See.