Fanna-Fi-Allah - Annihilation Into the Infinite 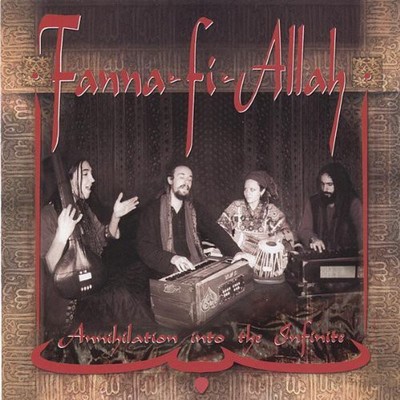 Fanna-Fi-Allah Qawwali Party Fanna-Fi-Allah translates as: annihilation into Allah. Qawwali is an ancient practice wherein the fire of divine love (ishq) is ecstatically expressed through the mystical verses of Sufi poets, sung in Urdu, Farsi, Hindi and Punjabi. Each Qawwali song embodies the mood of the poetry within sophisticated ragas combined with an exultant spontaneity. The foremost expression in this music is through the voice, accompanied by two harmoniums, booming Pakistani tablas, hand clapping and the tampura. Traditionally Qawwali music is performed in Sufi shrines wherein audience participation is integral to the prayerful atmosphere as well as dancing ecstatically to the music's driving rhythms and passionate chorus. Listeners will usually be immersed in tears of sublime devotion. Tahir Qawwal and Amena Chisty Qawwal lead the Fanna-Fi-Allah Qawwali party consisting of five to ten rigorously trained musicians. This collection also includes Arjun (Arjun & Guardians) and Deja (Hamsa Lila) from the party. Fanna Fi Allah are infinitely blessed to be the foremost disciples of Rahat Fateh Ali Khan (undisputable the greatest Qawwali master of Pakistan and only nephew-successor of Nusrat Fateh Ali Khan) and Dildar Hussein (World renound tabla master from the Nusrat Fateh Ali Khan's Qawwali party). This young Qawwali party has only begun performing outside of Pakistan, India and Hawaii since the summer of 2004. Fanna-Fi-Allah is already well known on the west coast after playing several private concerts and appearing at venues such as Earthdance, Dancing Dragons Festival, Oregon Country Fair, The Auburn Sacred Arts Fair, Harbin Hot Springs and broadcasting live on KVMR. Depending on the setting and audience, Fanna-Fi-Allah will often incorporate: trained dancers, acting out of Sufi tales, DVD footage of Qawwali in Pakistan, translations of the songs, and teaching about classical ragas.... Tahir and Amena are as well ready to lead workshops on this profound spiritual practice. 'I was in tears for over 2 hours...the vocal mastery and heartfelt devotion are compelling. More than a 'good' time, these young players move me to a greater sense of the mystery within' -Koda Sun (respected elder of the Earthome community) References: Rahat Fateh Ali Khan, Jai Uttal, Zakir Hussein, Daniel Paul, Jah Levi, Shimshai, Tina Malia, Sasha Butterfly, M.J. of Hamsa Lila, Kimberly Bass of Trance Zen Dance, Rizzwam and Muazzum Qawwali, Shahbaz, Terry Riley and Shabda Khan, the leader of the American Sufi community. For questions and responses e-mail at [email protected] or call at (530) 292-3528.

Here's what you say about
Fanna-Fi-Allah - Annihilation Into the Infinite.

1) Mere Saqi (My Wine)
2) Shama Penya (Nights Have Passed Without You)
3) Dekhene Ko Ya Muhammad (O to Behold the Prophet)
4) Sab Mandir Masjid Mekhane (The Temple. Mosque And Wine House)18:3