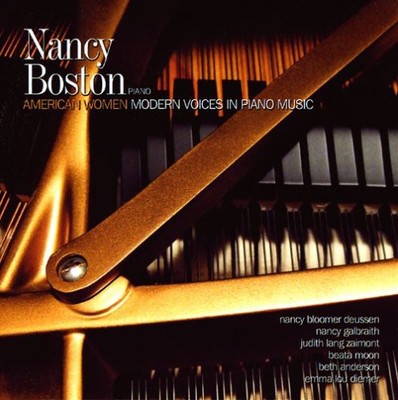 Biographical Sketch Nancy Boston, Professor of Music at Mansfield University of PA, earned the Bachelor of Music degree, cum laude, from Lawrence University, where she was elected to Pi Kappa Lambda, the national music honor society. She received the Master of Music degree and her Doctor of Musical Arts degree from the Peabody Conservatory. Dr Boston has specialized in the performance of music by female composers for the past 15 years, presenting many solo and chamber concerts. Dr. Boston's interest in the field of women and music has also led to the lecture "Good Daughters of Music" tracing the emergence of female composers in the United States. She has presented this at numerous college campuses in the eastern U.S. She has also presented lecture/recitals at two of the "International Festival of Women Composers". She is an active member of the International Alliance of Women in Music association. She has appeared as soloist throughout the United States. In addition to concerto soloist with several New York metropolitan orchestras, she has given recitals in New York City, New Jersey, Maryland, Wisconsin, Pennsylvania, New Hampshire, West Virginia, Virginia, Texas, Oklahoma, California, Illinois and Minnesota. She performed in Delaware for a television program. A winner in the Richmond National Piano Competition, she was also chosen to perform on the American Landmark Festival series, the Trinity Concert series, both in New York City and the Chase Memorial series in New Jersey. Foreign appearances include concerts in Paris, France, St. Petersburg, Russia, Ernen, Switzerland and Guelph, Canada. Her most recent sabbatical project presenting concerts of piano music by living American women composers led to the recording of a CD. The composers represented in this program have the advantage that no other generation of composers has had. They have had available to them recordings of all classical music which has come before. They have grown up surrounded by the sounds of today's pop music, jazz, folk, etc. They heard music constantly on TV, radio, in shops, in offices. This unique situation has resulted in a style which blends these sounds to create a classical sound for the music of today that we can identify with.