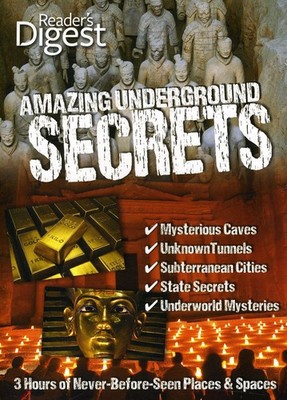 Beneath Earth's thin skin of rocks and soil, there is an inner world, full of surprises. Discover places you weren't supposed to see and secrets that were never meant to be revealed. Marvel at hidden treasures, natural wonders, and the extraordinary ways we are mastering our planet's underground worlds. Disc One: Natural Wonders - Nature's underworld is an ominous, alien landscape, inspiring nightmares, myths and legends. By challenging our fears and penetrating the dark we discover amazing sights and creatures. See the breathtaking deep cave paintings made by early humans. Wonder at the eerie light created by millions of tiny creatures in a New Zealand cavern. Travel with divers to explore a treacherous underground sea in the Yucatan. Be there as scientists discover a frozen lake that's been closed off for millions of years, perhaps containing ancient life forms. Enter a deep African cave with elephants and other plains animals as they ignore all risk in their search for essential salts. Caves with millions of bats, and sightless, colorless weird creatures, eerie catacombs and their gruesome inhabitants, glorious crystal caves... all this and more in the Natural Wonders volume of Amazing Underground Secrets. Disc Two: Secrets and Treasures - If you have got a secret - or something valuable to hide - there is no better way to conceal it than going underground. See the stunning treasure that was left in the tomb of the wife of Pharaoh Ramses II. Discover ancient China's surprising innovation buried along with the Emperor's Terracotta Army. A priceless hoard of Saxon gold, the hiding place for Nazi loot, the possible hiding place for the Holy Grail, an underground city, secret war tunnels, and the remarkable top secret alternative home for the US Government in case of nuclear attack... all this and more in the Secrets and Treasures volume of Amazing Underground Secrets. Disc Three: Mastering the Underground World - Our planet's underground world is our new frontier... it's full of potential, but harnessing it is difficult, and often very dangerous. Despite the risks, humans have been exploring the benefits of going underground for thousands of years. See the secret that kept the ancient, wealthy city of Petra at the center of trade routes for hundreds of years. Learn how the Italian city of Orvieto survived sieges. Marvel at Istanbul's ingenious cisterns, some as big as cathedrals. Discover how everyday life in cities was transformed by tunneling deep beneath their inhabitants. Be there as a great tunnel is constructed underneath the Swiss Alps, testing human ingenuity to the maximum. Elegant ancient underground waterways, mining for spectacular natural treasures, amazing underground rescues, uncovering the secrets of the Universe... all this and more in the Mastering the Underground World volume of Amazing Underground Secrets.

Here's what you say about
Amazing Underground Secrets.