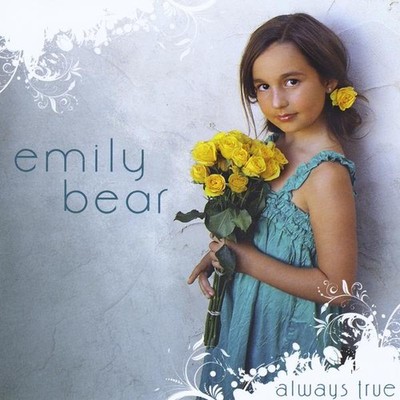 Solo piano music, all songs composed and performed by 7 year old Emily Bear. A mixture of styles, from dreamy love ballads to classical and jazz. A wonderful CD to add to your collection of Emily's distinctive music. Emily's music reachs out and touches you emotionally. A gift from her heart to yours. Emily Bear Biography: Emily Bear is 8 years old and began piano studies at the age of five with Emilio del Rosario at The Music Institute of Chicago. She currently studies classical piano with Mary Sauer, Principal Keyboardist for the Chicago Symphony Orchestra and jazz improvisation with Alan Swain. Additional mentors include Yoheved Kaplinsky, head of the Juilliard Piano Department. Emily is equally comfortable playing jazz, classical, or her own compositions. Emily made her professional debut performing a solo concert at the Ravinia Music Festival in July of 2007, when she was five years old. She played a solo 40 minute program mixing classical, jazz, and her own pieces. She is the youngest performer in Ravinia's more than 100 year history. She was asked back to perform solo concerts in 2008 and 2009 as well. On March 24th, 2008, Emily was invited to perform at The White House for the President and Mrs. Bush and 400 guests. She performed a 30 minute solo concert mixing jazz and her original compositions. At age six, Emily was a recipient of the 2008 ASCAP Morton Gould Young Composer Competition Award for her original song "Northern Lights." She was asked to perform at the awards ceremony in New York City and was invited to perform her winning song again for a performance at Lincoln Center. Emily received national attention when she was a featured guest on The Ellen Degeneres Show. She has appeared on the show six times in two years, performing an original song at each appearance. Emily made her classical orchestral debut at age seven, performing Mozart's Piano Concerto, no. 23, k488 with the Rockford Symphony Orchestra and then again with the Champaign-Urbana Symphony. This summer, Emily made her international debut, performing 2 solo recitals at the Asissi of The World Festival in Umbria, Italy and a solo concert in Hangzhou, China. She was invited back to perform for both venue's next year as well. Emily made her orchestral debut in front of a capacity audience performing her original song, "The Love in Us" with members of the Orlando Symphony Orchestra. She also performed at Noche de Ninos, a gala for Los Angeles Children's Hospital, hosted by Jennifer Lopez, Warren Beatty, Annette Benning, Arnold Schwarzengger, and Jewel, honoring Jamie Lee Curtis. Emily recently was featured at The Noble Awards at The Beverly Hilton in Los Angeles, a new awards show honoring 15 charities, produced by Michael Seligman, honoring Morgan Freeman. Emily was personally invited by Lang Lang to perform for him at a Master Class hosted by The Chicago Symphony Orchestra. She was asked to become a video disc artist for the Piano Disc System and just taped an episode for a new children's television show for PBS titled, "All You Need Is Music". Emily was also recently featured on the WFMT Radio Show, Introductions, performing a solo 45 minute live concert. Emily was asked by Steinway and Sons to perform a solo concert at the Chicago film premier of the new documentary film 'Note by Note: the Making of Steinway L1037'. She performed the concert on the actual piano built in the movie. She was recently featured at The Children's Ball, a black-tie gala for the Children's Memorial Hospital of Chicago and at an event in New York City for Arnold Schwarzenegger's charity: After-School All-Stars. Emily has performed at many additional charity events and fundraisers. Other concerts include: Steinway Young Artist Concert Series, Music In The Loft, Raue Center for the Performing Arts, WTTW Chicago Tonight's 25th Anniversary Concert, Kohl Children's Music in the Museum Concert Series, 2007 and 2008 Chicago Thanksgiving Parade on WGN, American Girl Place - Chicago and New York City, When Emily was six, she opened for Ramsey Lewis and his Trio with a 30 minute solo concert. She is the youngest student ever to be invited to study at The Aspen Music Festival. Emily has been featured in stories on: ABC, CBS, NBC, Fox News, WTTW, Chicago Tonight, and WGN and was recently featured in a story for Sunday Night, Channel 7, Australia, titled "Beautiful Minds." She was a guest on Good Morning America this past June and performed her original songs, jazz and a classical selection. This fall, Emily will be featured in the September/October back to school issue of American Girl Magazine. Emily has recorded four CD's of original music: Five Years Wise, The Love in Us, Once Upon a Wish, and most recently, Always True. Profits from each of her CD's are donated to the following charities: Susan G. Komen for The Cure, UNICEF, Ronald McDonald House Charities, and The Children's Hospitals of Los Angeles and Chicago. She is a member of ASCAP, SAG, and AFTRA.

Here's what you say about
Emily Bear - Always True.