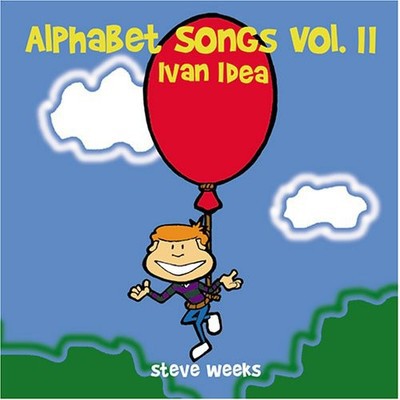 Alphabet Songs Volume II (Ivan Idea) is the second CD in the Alphabet Songs series and is a 2005 Parents' Choice Recommended Award Winner and a NAPPA Honors Award winner. It has received regular airplay on radio programs across the country, including XM Kids (XM Satelite Radio Channel 116) where the song 'Kiki Kangaroo' reached the #1 spot on their top ten list. Like the first volume, it dedicates a single song to each letter of the alphabet and covers the letters I through Q. The songs are upbeat, catchy, folk-based tunes about the things that are important to kids and their parents. BIOGRAPHY Singer/songwriter Steve Weeks was born in the rural countryside of the Carolinas. He spent his summers in the bucolic fields of.... Okay, it's me... Steve. Here I am writing my own biography. Most musicians' bios seem to be written from some adoring, anonymous person, but it just feels kind of funny talking about yourself that way, so I thought I'd just reveal myself up front. Here's my bio straight from the horse's mouth. I actually was born and raised in the Carolinas, South Carolina to be specific. I spent my summers mostly playing around in the woods and in abandoned cotton fields. Occasionally in the mountains, occasionally at the beach... The Carolinas are beautiful in that way. As young as I can remember, music was everywhere. It rang out in church. It was passed from person to person at the community bluegrass jams in the old abandoned one-room schoolhouse up the road. It breathed out of the furnace vents at night when someone in the house was plunking on our old upright piano. It was quietly hummed on the front porch swing, shouted out during long car trips, and whistled in the garden. I guess it's no wonder that I turned out to be a songwriter. I sang in the choir, played in the school band, and tinkered around with just about any instrument I could get my hands on. In college at the University of South Carolina, I started playing the guitar, mainly because I had no access to a piano and my roommate wouldn't have appreciated trumpet recitals. I played in a couple of bands, collaborated on various recording projects, and discovered the joy of writing songs. I now live in Colorado with my beautiful wife and our two wonderful kids. I write, record and perform original music for children and their families. Being a father myself, I find that this music comes naturally and from the heart. It's always easiest to write music from a place of sincerity. I have a huge interest in musical diversity that also finds it's way into my songwriting. Although my songs have a strong footing in folk music, I just can't resist squeezing that reggae bass line, 50's rock riff, African thumb piano or even a tin can into one of my tunes. Alphabet Songs is a series of CDs of original music that dedicates a single song to each letter of the alphabet. The songs are upbeat, catchy tunes about the things that are important to kids and their parents, things like courage, tolerance, pancakes, kangaroos, patience, and, most of all, friends. The first two volumes cover the letters A through Q; Volume III, which will cover the rest of the alphabet, is due for release in 2006. My songs receive airplay on various radio stations across the US and are regularly featured on XM Kids (XM Radio Channel 116). The music has received rave reviews from DJs, music critics and parents alike. Kenny Curtis, program manager of XM Kids, called them "...honest, well-crafted songs that appeal to kids, parents... and anyone who doesn't mind having a pleasant melody bouncing around in their head for a day or two." I perform at music festivals, schools, bookstores, coffe shops, radio stations and private concerts and volunteer at a local elementary school teaching songwriting workshops. By far, the most rewarding part of being a musician is when people tell me that they listen to Alphabet Songs as a family. For me, music has always been about bringing friends, family and community together, and I'm very proud to be contributing to this tradition. I love performing for a group of children and watching as the parents gradually shift up into the circle to hear a little better... and spend some time with their kids.

Here's what you say about
Steve Weeks - Alphabet Songs 2.