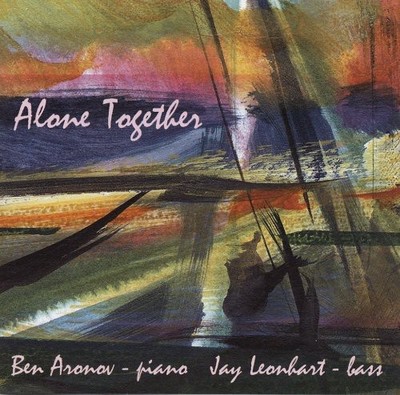 After establishing himself in the Los Angeles jazz scene, Ben Aronov moved to New York City in 1960. He spent his first days earning a Bachelor of Music at the Manhattan School of Music and was welcomed into the local music world with a wide variety of jobs-from accompanying star vocalists to joining the rhythm sections of well-known jazzmen, with some solo piano gigs added to the mix. Eventually, he found himself playing with bassist Jay Leonhart, who came to New York a few years later. Jay had studied at the Peabody Institute in his native Baltimore, as well as the Berklee School of Music in Boston and Oscar Peterson's Advanced School of Contemporary Music in Toronto. While they were establishing separate careers as much-in-demand jazz and studio musicians, Ben and Jay struck up a friendship, both musical and personal, and by the 1970s, they occasionally played in New York jazz clubs as a duo. In 1982, on one of these jobs at Zinno's in Greenwich Village, producer Roger Rhodes (also a recording engineer, bassist, and music publisher) dropped in to hear their music, having recorded each of them on sessions in New York studios. Roger had long been an admirer of their individual playing, and was delighted to hear how well Jay and Ben fit together musically. He decided they should be recorded, and got them up to the now legendary RCA studio A, where they taped the music that is presented here. For a variety of reasons, the project languished for 24 years. Recently, Roger decided to revive it. With the new technology that has become available, he re-mastered the original tapes, and the sound on the resulting compact disc is remarkable in it's clarity and tone quality. The choice of material is rich, and the music is wonderful. Ben's approach to each piece is imaginative and sure. He displays an exquisite touch and a seemingly effortless flow of ideas. Jay matches him perfectly. He accompanies with great intuition, takes the lead beautifully when it is appropriate to do so, and his lyrical solos fit with Ben's playing the way a hand fits a glove. Ben and Jay explore a wide range of genres on these selections. In both standard songs and originals, they include subtle homages to Bud Powell, Thelonious Monk, Lennie Tristano, Bill Evans, Oscar Pettiford, and Ray Brown, to name just a few. Their collaboration is both serious and good fun, a poignant musical conversation between two good friends. In the years since this music was recorded, Ben covered many musical bases in New York, including the long Broadway run of the musical "Cats," and has subsequently moved to the south of France with his wife, Nicole. Operating from there, he continues a busy life as a world-class jazz pianist. Jay continues his career in New York City as a first-call studio musician and jazzman. He has also developed his singing and song-writing abilities into a number of delightful solo record albums and one-man shows. Bill Crow.

Here's what you say about
Benny Aronov - Alone Together.