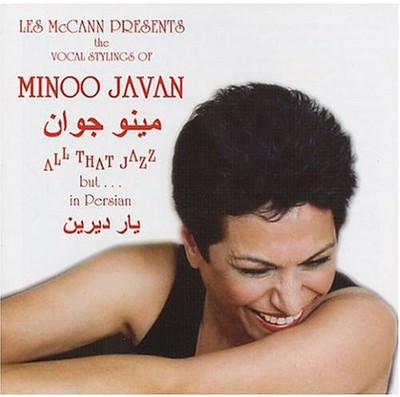 Minoo Javan's voice has found a special place in the hearts of Persians from the far corners of her native land to the great concert halls of Europe and America because of her rare ability to portray her love for Persian culture and her devotion to it's people, poets and artists. Her voice and recordings are heard regularly on the BBC and other broadcasters around the globe. Her early musical career began when she rose to prominence by appearing as the featured performer in more than 300 concerts and becoming a regular feature on radio, where she performed Persian Folk songs, among other repertoire. After coming to America, she studied Music at the University Of Southern California's School of Music, where she was awarded one of it's prestigious opera scholarships. Other recent releases of her recordings include Echoes Of Love and Persian Folk Songs. In a recent interview, Minoo Javan described her latest album: 'This project has been on my mind for many years, since American Jazz has penetrated my soul in much the same way that Persian music has been embedded in my archetype. After singing countless Persian folk songs and other forms of Persian music, followed by learning and performing Western Classical music and subsequently performing the music of Broadway and Cabaret on various stages in different parts of the world, I found myself still fascinated with an old hunger to somehow interpret the richly textured American Jazz idiom through a Persian lens.' 'From the moment I arrived in America I felt embraced by it's culture and yearned to better understand my new home by exploring it's varied forms of music. Since so many of the 'Persian Americans' I have met here share the same curiosity, and since so many of the Americans who so generously welcomed us have been interested in Persian language and music, I thought what better way to accomplish my goal than to sing soulful Jazz tunes in the soft and romantic Persian language. This album is the first child of that thought. My hope is that in some small way it may serve as a bridge to bring these two rich cultures closer to one another.' 'When I first sang Persian folk music for Les McCann many years ago, he liked it but laughed when I asked him if it could be performed as American Jazz. When our paths crossed again years later and I told him of my dream to sing American Jazz with Persian lyrics, he didn't laugh! My heartfelt gratitude to him for producing this recording and showing me with his boundless enthusiasm and creative genius what a true professional is all about. It was a privilege for me to learn and perform under his direction, hopefully while absorbing a few drops from his vast knowledge of the ocean of Jazz culture. I will always be thankful for his teachings, generosity and the gift of having his penetrating voice on this recording. I shall forever treasure the blessings of our friendship that grew and deepened while we worked and laughed together.' In Joel Dorn's liner notes on Relationships: The Les McCann Anthology (Atlantic 1993), he wrote: 'Les McCann built a career on partnerships and an unwavering trust in the creative process. His output has been eclectic, composed of both recordings as a leader and musical affiliations with other singular artists, but his body of work has a commonality to it; a trust in the spontaneity of inspiration and the gestalt that arises when great players push each other to new creative heights. ' Les McCann left his native Lexington, Kentucky in the early '50s and joined the Navy. He first gained some fame in 1956 when he won a talent contest in the Navy as a singer that resulted in an appearance on television on The Ed Sullivan Show. After his discharge, Les went to Los Angeles and enrolled in college to study broadcasting, but his abiding passion was music so he formed a trio, which became a fixture in the active club scene on the Sunset Strip in the late 1950s and early 60s. Les signed with his first label, Pacific Jazz, in 1960 and quickly became it's top-selling artist with albums such as 'Les McCann Plays the Truth' and 'The Shout.' Les switched to the Limelight label during 1965-67 and then signed with Atlantic in 1968, when he appeared at the 1968 Montreux Jazz Festival, recording 'Compared to What' and 'Cold Duck Time' on 'Swiss Movement' with Eddie Harris. His soulful funk style on piano and singing has been widely influential. Most recent recordings released in 2002 include 'Pump It Up' (ESC Records), 'Fish This Week' (Blue Note) and 'Les McCann Ltd.' (Pacific).

Here's what you say about
Minoo Javan - Les McCann Presents the Vocal Stylings of Minoo Ja.

1) Getting Some Fun Out of Life (Ba to)
2) The Nearness of You (Dashte Garme Aghooshe to)
3) Why Should I Care (Yare Dirin)
4) '?Round Midnight (Nimeh Shab)
5) When I Look in Your Eyes (Arame Negahat)
6) You Go to My Head (Sarsharam Kardi)
7) I'll String Along with You (Dar Del Neshandamat)
8) I'm a Fool to Want You (Majnoonat Cheryam)
9) Ev'ry Time We Say Goodbye (Bedrood)
10) Everything Must Change (Les McCann Guest Artist) Everything