Cantus - Against the Dying of the Light 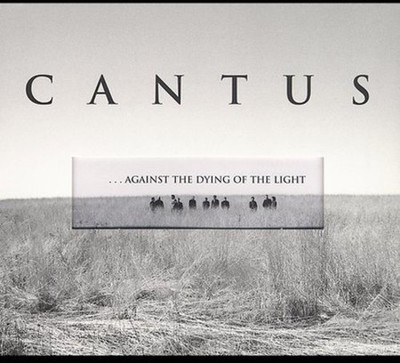 ...against the dying of the light (2002) In September 2002 Cantus released ...against the dying of the light, a disc which takes the listener on a journey from the depths of despair to the pinnacles of joy and features rarely heard virtuoso works for male choir by Carl Orff, Jean Sibelius, Samuel Barber, Josquin Des Pres and Claude Debussy. The newly commissioned 'Two Laments on Dylan Thomas' by Kenneth Jennings, Schubert's haunting 'Grab und Mond' and Randall Thompson's 'Alleluia' are saturated with Cantus' emotionally-charged singing. This disc is a 24-bit high resolution recording. About Cantus Enjoying a successful blend of national tours, subscription concerts in the Twin Cities of Minneapolis and Saint Paul and recording projects, Cantus is gaining recognition as one of America's finest professional male vocal ensembles. The ensemble's performances are met with overwhelming praise for it's unique blend of youthful vitality and polished nuance. Their repertoire spans many periods and genres, including Gregorian chant, Renaissance motets, contemporary sacred works, art songs, world music, spirituals, and pop. Cantus' singing has been called 'spontaneous grace' by the Washington Post and 'wonderful' by the L.A. Times. Cantus was founded in the fall of 1995 when a few college friends gathered on the campus of St. Olaf College in Northfield, Minnesota. Since then, Cantus has performed more than 400 concerts across the nation during the past seven years, including appearances at AmericaFest, the Lied Center of Lawrence, Kansas, UCLA Live, the University of Chicago Presents, Merkin Concert Hall of New York City, Harvard University, the University of Wisconsin Union Theater and many conventions of the American Choral Director's Association. In September 2000, Cantus established itself as a full-time nonprofit arts organization based in Minnesota. In summer 2002, Cantus sang to great acclaim at the Oregon Bach Festival and at the Sixth World Symposium on Choral Music in Minneapolis. In summer 2003, Cantus made it's first European appearance singing at the Pollyfolia festival in Normandy, France. For the last three years Cantus has also appeared in concert with the Saint Paul Chamber Orchestra in a holiday program titled Cantus and Carols. Cantus is a resident artist at St. John's University, Collegeville, MN. Having worked with thousands of young people across the country, Cantus is committed to educational endeavors and encouraging singing with their motto 'Live. Play. Sing.' Cantus has recorded seven CD's on it's own label, Cantus Recordings. Their releases 'Let Your Voice Be Heard' and '... against the dying of the light' have been hailed by critics and the public alike. Of these two recordings, American Record Guide said; 'male chorus fans are in for rare and enchanting treats here. Watch for this unique and charismatic group - it is just the sort of un-stuffy and engaging ensemble this nation needs more of, if we are to continue generating interest in serious music in an overwhelmingly pop-oriented culture. We are likely to be hearing much more from them.' Cantus' release 'Deep River', a collection of African-American Spirituals received a 10/10 rating from Classics Today for both sound and artistry saying 'Inflection, phrasing, dynamics, and balance show the polished presentation exhibited only by singers who both possess that certain intuitive ensemble-sense.' REVIEWS FOR CANTUS 'The all-male chamber choir Cantus sings with astonishing perfection of tone and diction. Effects are calculated to a hair's breadth. Means and ends join in genuinely glorious music-making. The complexity of the music is fully expressed, the diction is perfect, the emotions alive.' John Story, Gramophone Magazine January 2005 'With impressive versatility, the 10-man group tackled songs of the season rooted in the cultures of several continents, and delivered each with a plethora of passion and spirit to spare.' Rob Hubbard, Saint Paul Pioneer Press December 2004 'The group's intonation is like velvet, and the solos are uniformly excellent'. Wes Phillips, On HiFi.com December 2004 'Wonderfully sung and sensitively interpreted by these world-class singers. An exuberant sincerity that informs everything, governed by an obvious love of beautiful sound and warm expression.' David Vernier, Classics Today 'The amazing men of Cantus weave their usual spell, with singing of unimaginable (unless you've heard them) precision, sensitivity and deep emotional power. Their way with this music's unique brand of aching sorrow keeps recurring lumps in your throat; their sense of jubilant celebration makes you want to get up and dance and sing along.' Linsey Koob, American Record Guide January/February 2004 'In it's Los Angeles debut Saturday in UCLA's Schoenberg Hall, Cantus sounded 50 voices strong. Wonderful.' Los Angeles Times 'An unqualified recommendation for a disc from an outstanding group from whom I hope to hear a great deal more.' Ivan Moody, International Record Review 'If it is a night of wild eclecticism and first-rate musicianship you desire, ... just take in an evening with Cantus. You won't be disappointed.' St. Paul Pioneer Press 'The Minnesotans come across as down-to-earth types who present their music with the eagerness of hometown guys singing for the pleasure of friends and neighbors.' Cleveland Plain Dealer 'To all this varied and challenging repertoire the singers of Cantus brought richness of sound and well-practiced musicianship. Singing full-out, they sound like 20 or 30 voices -- and maybe just two or three at their softest. And they really communicate, not just with the audience but with each other.' Mike Anthony, Minneapolis Star Tribune 'These twentysomethings obviously love what they do, and they do it well. Their genre-crossing musical phrasings were consistently polished and synchronized. The effect was an engaging sense of intimacy and spontaneity, as in a private house concert.' Sabine Kortals, Denver Post.

Here's what you say about
Cantus - Against the Dying of the Light.