A Tribute to Edith Piaf: Live at Montreux 2004 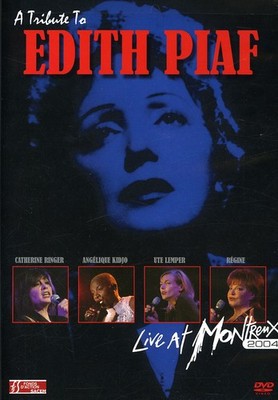 She was referred to as Mome Piaf, slang for little bird, a nickname that reflected all her physical fragility. One meter, forty seven centimeters of pure talent and a fascinating life-star on stage: dramas, pain and drugs in private- perfect pitch with an expressive voice that orbited the earth and made her one of the symbols of Paris, specifically, and France in general. Timeless, she had never stopped inspiring artists from Louis Armstrong through to today's stars of pop, salsa, disco, rock or rap. Six artists accompanied by a jazz quartet led by pianist Baptiste Trotignon, paid homage to her at Montreux. The presence of Angelique Kidjo, from Benin, and the Swiss Michael Von der Heide reminded US of her facets of music 'Made in France', highlight how much Edith Piaf played with musical styles. The German Ute Lemper proved, once again, the universality of this friend of Marlene Dietrich. And Barbara Morrison, the great American voice, suggests, in her own way, that the little lady in black incarnated a special sentiment ' a la francaise'. The person of whom the writer/trumpet player, Boris Vian wrote: 'Edith Piaf is a blues singer. In France, the blues has neither 12 time nor 4 time. It's a sort of waltz with an accordion that follows it; but don't be fooled, it's the same strange flower growing out of the sadness of poverty'.

Here's what you say about
A Tribute to Edith Piaf: Live at Montreux 2004.