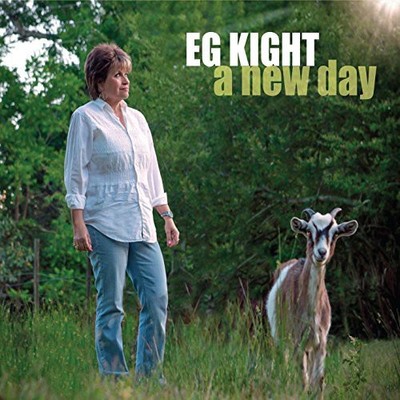 Georgia native Eg Kight has performed around the world, and was involved in fundraising in Germany, Japan, and Mexico. Kight takes great pride in representing the U.S., and was honored to be the recipient of the 2013 Georgia Music Legend Award. Considered one of the true blues vocalists, Kight has had six Blues Music Awards nominations and two Blues Blast nominations, with three for Song of the Year. Many artists have recorded her songs, and she's had two songs on two Grammy®-nominated albums, and several on two blues compilations that maintained Billboard chart positions for over a year. And earlier this year one of her songs aired on ABC Family. Kight continues to help shape contemporary blues with her latest release, A NEW DAY. Once again co-producing with Paul Hornsby (Marshall Tucker, Charlie Daniels, etc.), Kight relied heavily on her touring band for arrangements on this disc, and the result has helped her reach the pinnacle of her musical mastery. She also enlisted special guests Greg Nagy, Tommy Talton, Randall Bramblett, and Paul Hornsby on keyboards to help round out the album. Ranging from sassy straight-ahead blues, to a gospel anthem, to her trademark ballads, this CD provides the listener with a delectably varied menu that will leave them with a sweet taste in their mouths. Kight's grateful to be alive, after a life threatening illness a few years back. And according to Kight, "A year after the illness, I was finally able to write songs again, and they seem to flow from a deeper place. Several of these songs came from the 'new me.' I hope the songs inspire and help you along your path. Thanks to the good Lord and my music, I seem to be healing and on my way to a 'new normal.' Every day of my life now is 'A New Day.'" 'Eg Kight has a stellar reputation as a writer, performer and producer. Even her legion of longtime fans will marvel at the musical and emotional range that she captures in 'A New Day.'' Jesse A. Finkelstein, Blues Radio International.

Here's what you say about
Eg Kight - New Day.