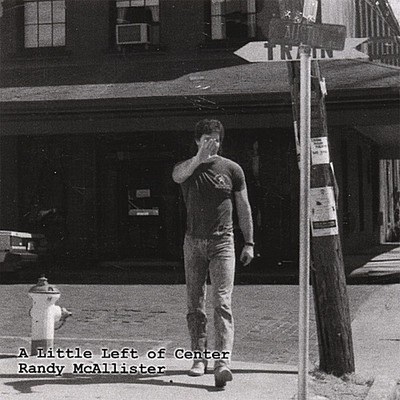 So...What Moves You? Answer: 'A Little Left of Center' after you hear it... Randy McAllister's 2003 release. Another almost unknown album that saw extremely limited initial, unsupported, distribution. Never-the-less, a landmark collection including an untitled track 11. Randy just keeps delivering. Another 10 original Randy McAllister compositions. Just start playing and you won't stop. He's like a great read. Easy to digest on a superficial level with undertones and subplots that you just can't focus on when the music and the stories are so good. 'She Don't Dig Your Chili' is a toe tappin, foot stompin, table rappin good time along with 'What Moves You' in the number one slot. 'Why' is the kind of song that will rattle your soul. The powerful electric lead-in on this one is a legend maker. McAllister's deep, rich, voice more than matches the powerful guitars that drive all but the piano accompanied 'Wandering Shepard'. Next up 'Brother Bob's Church and Casino' a light hearted, strong rockin spoof of tele-evangelism. 'Distractions' is a favorite and 'What She Should Have Let Go' is a classy electric ballad, with story lyrics that are a perfect match to the melody. 'Trying Not to Lose It in Minnesota' sounds like a cross between Zydeco, Mariachi and Germany beer garden band, 100% fun with another McAllister road story. 'Drinkin' to Prevent a Killin'' offers another great story embellished by Robin Sullivan guitar solos. The untitled track 11 is vintage McAllister. Music and lyrics well blended for another vivid architypical American portrait. If you missed 'A Little Left of Center', you missed the essence of American music as written and performed by a Master of Americana. - Review by World Entertainment Network Randy McAllister is one of the premier singer/songwriter/musicians to emerge from Texas. His music has been hailed as being some of the most original and innovative being made today. While comparison's are not easy, it has been said that his music is a cross between Doug Sahm, John Hiatt and Delbert McClinton, with a blues man's background and sensibilities thrown into the mix. Raised in the town of Novice, Texas, McAllister is a fifth-generation Texan, whose father was both a fireman and musician. His father was a drummer of a band called The Flames. At a very young age, he began to take up drumming, but the drums were just the beginning. McAllister found the harmonica in the early 1980's while stationed in Massachusetts as a member of the U.S. Air Force. 'Taking cues from Blues legend 'Earring George' Mayweather, a Boston resident and harmonica master. McAllister moved back to Texas in 1992, a strong and skillful harp player who was developing his vocal and songwriting skills. 'If Mark Twain had crafted a 21st century roots musician, he might have created a character like Randy McAllister, with an easy-going persona and a wry, observant wit, McAllister weaves material in the singer/songwriter tradition, with nods to a variety of styles.' He is one of those rare artists who is able to meld genres such as gospel, blues, country, Tex-Mex, rock and zydeco together and come away with something that is uniquely him.' ' In performance, his songs combine an uncontainable energy and intensity with lyrics that do not shy away from tough topics. From urban violence, homelessness and other harsh realities to more common concerns like love and dating, McAllister's songwriting approach is particularly skillful, able to be both truthful and funny. McAllister takes universal feelings and translates them into today's reality, with his own pointed style using his distinctive, soulful voice.' McAllister has released four critically praised albums beginning with his debut Diggin' for Sofa Change, followed by Grease, Grit, Dirt and Spit, the much heralded Double Rectified Bust Head, 2002 GRAMMY NOMINEE Givers and Takers, and his most recent album Temporary Fixes all built on his firm foundation of songwriting.

Here's what you say about
Randy McAllister - Little Left of Center.

1) What Moves You
2) She Don't Dig Your Chili
3) Why
4) The Sound of Leaving
5) Wandering Shepherd
6) Brother Bob's Church ; Casino
7) Distractions
8) What She Should Have Let Go
9) Trying Not to Lose It in Minnesota
10) Drinkin' to Prevent a Killin