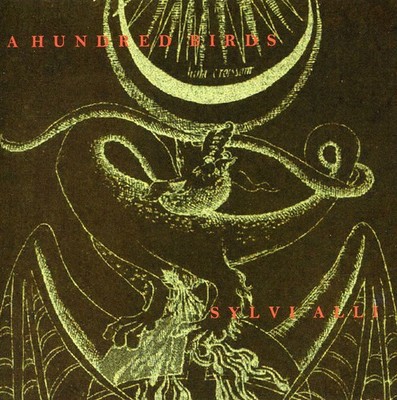 Eleven songs, eleven stories unravel their hypnoagogic dream journey through the internal landscape of twilight visions and memory.....where enchantment borders the perilous and whimsy settles on everything like gold dust on moths. Supported by a variety of instrumentation, Sylvi's enchanting vocals are transported to new heights in these original songs. With all the music composed and performed by Sylvi, A HUNDRED BIRDS is her most personal and intimate album to date. __________________________________________________________________________ Originally from the 'Deep South', Sylvi migrated westward, bringing with her the haunted strains of moss-covered oaks and antebellum ruins, to embrace the beauty and nature of the west coast. Her music runs a spectrum from dark gothic to whimsical ballads to experimental songscapes. She approaches her compositions from her background as a visual artist, also drawing from her classical piano training as well as from experimental forays into ambient industrial soundscape. She also composes and records music for film, dance and theatre. Review excerpts: 'Somewhere between gothic folk and ambient music, 'A Hundred Birds' is a dark, mellow journey in myth and madness. The instrumentation...mixes electronics and acoustics...into hypnotic, gentle and slightly disturbing soundscapes. Alli's near operatic voice vacillates between soaring highs and exploring the lower range of her voice. She sounds like a cross between Lisa Gerrard and Nina Simone. Her songs are filled with visionary images that linger in the mind. The opening song 'Arrival' has a psychedelic feel. 'Twilight' is a lullabye, the sweetest thing on this mournful album. The closing track 'Maenad' is an experimental piece that ends the song-cycle on an unsettling note. For lovers of 'heavenly voices' and folk noir.' (Ethereal lad) '......she writes intriguing songs which captivate you from the beginning to the end. As a result, this record has got absolutely not one dull moment and songs like 'Arrival', 'Embers' and 'Sovereign' will grow on you each moment you listen to them again. For people who love quiet pop with sometimes light folk influences "A Hundred Birds" is an album you must have.' (Gothtronic) '...The music is a bit hard to categorize.... It's extremely laid-back folkish music, but with a gothic touch. Think of Kayno Yesno Slonce, but with more traditional songstructure, and with heavenly female vocals. Think of a darker and quieter version of Loreena McKennit. Think of Dead Can Dance without the tribal influences, like their version of 'The Wind That Shakes The Barley'. That should give you a pretty good idea what kind of music this is. The eleven songs on this CD are together just over 46 minutes in length. Every song does not continue endlessly, luckily, but stops long before it has a chance of becoming too much of the same. Instead, every song has it's very own beauty coming from a wonderful combination of melody, rhythm and vocals. This is indeed a wonderful album, and everyone who enjoys dark, melodic and relaxed music should definitely check Sylvi Alli out. There's a certain depth in this album, which makes you want to listen to the songs time and time again, discovering new things over and over. This is perfect music for dark nights, when you're together with your loved one for instance, or when you just want to create an intimate atmosphere.' (Heathen Harvest)

Here's what you say about
Sylvi Alli - Hundred Birds.