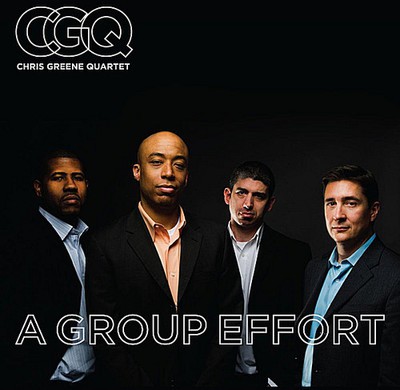 CREDITS: Produced by Chris Greene for Cee Gee Music Co-produced, engineered and mixed by Joe Tortorici Mastered by Todd Carter at Bel_Air Sound Studio Photography by Ozzie Ramsay Recorded live in concert at The Mayne Stage on October 27, 2011. Design & layout by Michael Kostal LINER NOTES: These guys may be onto something. Every so often, a band comes along that straddles the jazz and pop scenes. They don't try to change the world, but don't cheat the listener, either; they engage new audiences without dumbing down the music. They respect the tradition but they give it a spin, which slowly builds a base, and then a fan club, and then a real following. Their recordings gain an iconic stature, apart from their objective quality; the talent is there, but the listeners hear more - something else, something that grabs them in ways they didn't expect. Over the last seven years, the CGQ has shown signs of becoming one of those bands. The list of such bands stretches from coast to coast, filled with regional favorites whose popularity grew until they finally eclipsed the neighborhoods that formed them. It includes a 1950s San Francisco pianist, Vince Guaraldi - whose local fame grew into his iconic status (as the man who composed music for the "Peanuts" TV specials) - and a small-town Pennsylvania pianist named John Coates, Jr., whose gentle iconoclasm (captured in recordings made at the previously unknown Deer Head Inn) left it's mark on a young Keith Jarrett in the early 60s. The list includes Charles Lloyd's band, which arose from obscurity to suddenly appear on everyone's turntable in the mid-60s; and the Chuck Mangione Quartet - a solid jazz partnership in the 1970s that grabbed a young new crowd, before it's music turned to mush; and, at the top of the list, Dave Brubeck, who two decades earlier had barnstormed the college campuses that soon became his nationwide community. I'm not guaranteeing that the Chicago-based CGQ will have that kind of success: times have changed, and even music with the right edge can't always cut through the modern clutter. But if they do get there, I won't be shocked, either. On their first in-concert CD, buoyed by an appreciative crowd, saxophonist Chris Greene and his simpatico teammates demonstrate their spirited approach to the jazz conundrum: How to keep the music fresh and new, without resorting to foolishness that dilutes the idiom's power and promise? For Greene, the answer lies in using familiar materials - the funk and hip-hop he heard growing up - as a bridge to casual listeners looking for more. But not as a gimmick. "My intention for using funk, not to be too lofty about it, is the same as that of Bartok or Beethoven, when they used folk melodies as an element in their compositions," Greene explains. "So when there's funk in the music, it's because I hear it there, and not because I'm just trying to please the audience." He has help. Steve Corley (on drums) and Marc Piane (on bass) play a huge part in making this band tick. The music comes packed with infectious but tricky rhythms; Corley and Piane have tamed that element without draining any of it's life-force. And Damian Espinosa on piano? Fuhgeddaboudit. He's been with Greene the longest, and it shows: he illuminates the music's wealth of possibilities with the same ardor as the leader himself. The music isn't just for kids, by the way. Not so long ago, at a free concert in Chicago, Greene recounts, "a 60-ish black lady comes up - a lady who'd seen a lot in her time, heard people like Duke Ellington and Count Basie - and she said, 'You know, you guys remind me of how jazz was played back in the day.' She saw right through all the funk and the other stuff and got the traditional element. She found the honesty; she knew we were coming right out of the tradition." I'm telling you. These guys may be onto something. NEIL TESSER.

Here's what you say about
Chris Greene - A Group Effort.