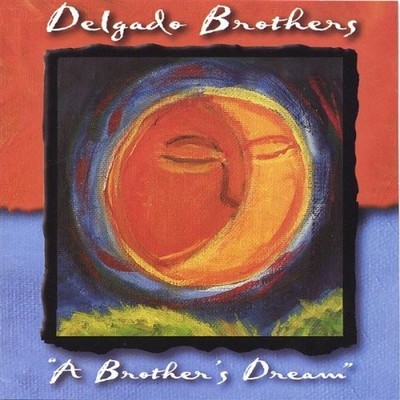 Delgado Brothers: A Brother's Dream (Bell Asher 10724) This is, to my knowledge, the third Delgado Brothers album and given the outstanding brilliance of their last release, Let's Get Back (on Mocombo Records) they certainly have established a reputation for world class musical genius. But, even more, The Delgado are one of the very few roots-rock-influenced bands who have profound concepts to go with the musical abilities they possess. Too many virtuosos have command of their instruments but very little to say that's meaningful and in today's scary, violence-promoting environment we desperately needs acts such as The Delgado's to bring some sanity to the airwaves. Few acts could deliver messages of hope, love and brotherhood as melodically as this El Monte-raised class. And while one couldn't label 'A Brother's Dream a stereotypical blues album, the pervasive truth and honesty combined with full-of-feeling performances from all involved, tie The Delgado's securely to blues, soul, gospel and all authentic American music. While tempted to label The Delgado's a poor man's Los Lobos, simply to convey to the reader what kind of music to expect, one must be outspoken regarding where The Delgado's should be. No need to get into the Sad state of affairs in North American record industry priorities (as anti-talent and anti-music as it's ever been from Rob Zombie to brain-dead Gangsta Rap) and one always clings to the prayer and hope of Good triumphing over Evil. We can only hope that The Delgado's exceptional talents and knack for magical and memorable music finally wins out and propels them to the exposure and fame they truly deserve. While no longer with John Juke Logan's Mocombo label, John makes his appearance on tenor harmonica on one tune (Lost In The Shuffle) and Victor Bisetti of Los Lobos (a close family friend) is featured on several tracks, The Delgado's are truly unique in many ways. Three brothers, Steve, Joey and Bob Delgado form the nucleus of the band with Dave Kelley on keyboards and Ray Solis on percussion rounding out the unit. A 1960s/70s El Monte upbringing in a totally blue-collar Chicano environment (in a household of eleven children) gave The Delgado's perspective in a variety of angles and areas. One thing that comes through loud and clear is the message that love and family are far more valuable and meaningful than any bag of goods Big Brother or The Devil will try and sell you. They've experienced first hand what money, drug and violence addiction promotion does to communities and people. Yet, you won't find outrage or anger in The Delgado's music. They keep it simple with simple messages of love, affection and spreading joy mixed with special songs to real people in their lives (Talk to My Friend, In Step, Jennie and Picture of You). From what I hear The Delgado's have a rabid following in California and upon first listen one is easily swept up by a sound that is so rare in these times. Memories of old Ry Cooder, Santana, Jackson Browne and Los Lobos albums, all classics, are evoked yet this is in no way derivative. The Delgado Brothers are steeped in four decades (at least) of truly beautiful and meaningful music so it's appropriate to call them the torch-bearers of today's music scene. Mamas Crying is an intense tune featuring Joey Delgado's outstanding guitar work on top of a layer percussion and swirling Hammond organ. A great opening cut. Lost in the Shuffle is a dreamy rolling blues featuring slinky slide from guest Dave Melton and John Logan's always superfine harp. Betty Sue Boogaloo is a rollicking little ditty that'll grab your toes and tush. What's It Gonna Be ranks as one of the most beautiful songs you'll ever hear. Moving. Do You See Me? has a serious message tied to good-time shuffle. Leave Me Alone will undoubtedly score on radio (blues) playlists thanks to it's raw delivery and biting bare wires guitar from Joey D. And, last but not least I must state that Steve Delgado has an excellent voice and delivery and with a singer of this caliber to carry the load this band scores perfect score and highest ranking once again. The Delgado's might just be the best rock band in the world today. They're easily the best Unknown one and if you value real talent and excellent music you'll be completely in love with this album. 6 big bottles for a disc that is destined to be a classic. (Beware - don't confuse The Delgado Brothers with the UK-based Delgado's. The Brothers are pure shinola...). A Grigg - Real Blues Magazine June 2003.

Here's what you say about
The Delgado Brothers - Brothers Dream.