The Sons of the Pioneers - 75th Anniversary 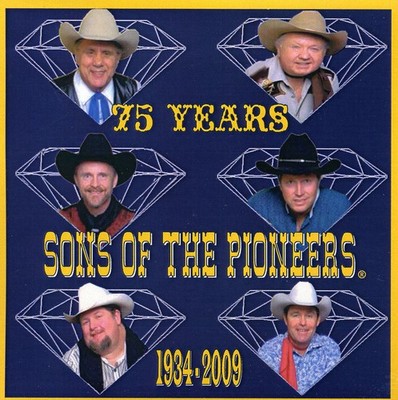 There was really only one way to celebrate our 75th Anniversary and that was to affirm the songs, the harmony and the arrangements that have been our hallmark. For over 75 years The Sons of the Pioneers have been proud to perform the music of the American West celebrating the West, it's awesome landscape, it's people, it's culture and the American Cowboy. Certainly, many of the songs we originally introduced and which have been our signature, such as Tumbling Tumbleweeds, Cool Water and Ghost Riders in the Sky, have become forever entwined into the very fabric of the West. Our musical heritage started back in 1934 but has been continuously performed and built by those who joined later including those present members who hold 40 and 30 year tenure. We embrace that heritage and strive to honor it in every performance. We are honored to have been inducted into the Country Music Hall of Fame, National Cowboy Hall of Fame, Western Music Hall of Fame, Texas Swing Hall of Fame; awarded a Star on the Hollywood Walk of Fame; and designated a "National Treasure" by the Smithsonian Institute. For more information on Sons of the Pioneers, our awards, our music, our videos, bios of current members and much more, please visit our official website at sonsofthepioneers.org. Each song is performed in it's classic arrangement with the distinctive harmony upon which our legacy rests. There are no "sidemen" or "studio musicians". The members perform all of the vocals and instrumentals. The two bonus tracts have captivating orchestral backgrounds. Pioneer Heaven is a brand new song making it's debut on this album. It was composed by thirty year member Gary LeMaster as a moving tribute to key members of the Pioneers, past and present. Historians of the Pioneers will especially enjoy it. The remaining songs are a tour de force of our timeless hits. Our brilliant songwriter members, Bob Nolan and Tim Spencer, are well represented by "Tumbling Tumbleweeds", "Cool Water", "Blue Prairie" and "Everlasting Hills of Oklahoma". Cole Porter wrote "Don't Fence Me In" especially for the Pioneers. Luther Nallie contributes an inspired piece of Dixieland clarinet to "Just a Closer Walk". World Champion fiddle player Ricky Boen provides a fast paced turnaround on "Cimarron". Perhaps no song better exemplifies the Pioneer harmony than the beautiful "Blue Prairie". All in all it just might be our best album ever. Why create a new recording? The answer is simple - it's dramatically better. For the group's 75th anniversary, the Pioneers wanted to preserve their signature songs using current 21st Century recording technology. Our fans demand and deserve the highest quality sound possible. This completely new recording by the current members utilizes the best of modern recording methods. The result is a spectacular improvement from prior recordings. Like crisp mountain air the new album's sound is cleaner, clearer and more robust. You will enjoy a sound spectrum as broad as the prairie. In comparison, the old 40's, 50's and 60's monaural recordings have inherent limitations which just can't be re-mastered or re-mixed to bring up to today's quality standards. Riding up the trail these 75 years has been an honor for those who carry the name Sons of the Pioneers. We know that any longevity we enjoy is due to our fans and we are thankful for each one. It's our hope to keep the legend alive and well, to be passed on and enjoyed by future generations. Here's to traveling that trail together for another 75 years!

Here's what you say about
The Sons of the Pioneers - 75th Anniversary.