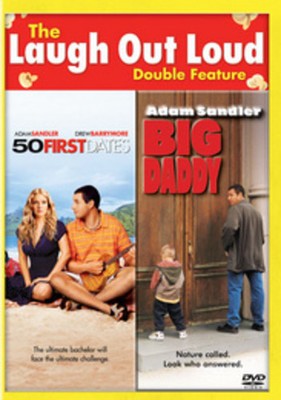 Two good movies for the price of one. Big Daddy: Adam Sandler stars as Sonny Koufax, a perpetual adolescent whose girlfriend gives him the ultimatum of taking some responsibility into his life or saying goodbye to her. Magically, the child of his roommate turns up on his doorstep, and Sonny decides to take the child into his care to show the lady he is capable of being responsible. 50 First Dates: 50 FIRST DATES: Scatological and sentimental, satirical and sincere, 50 FIRST DATES pairs Adam Sandler with Drew Barrymore in a romantic comedy about short-term memory loss and the power of love in Hawaii. Henry Roth (Sandler), the local marina veterinarian, only dates tourists because he's afraid of commitment-that is, until he meets Lucy (Barrymore). Unfortunately, Lucy lost her short-term memory months ago in a car accident, and for her, each day is October 13th. She follows the same routine every day-breakfast at the same restaurant, pineapple-picking with her dad, and eventually bed time, where sleep wipes away her memory once again. Henry, however, refuses to be forgotten, and as his puppy love matures, he embarks on a quest to restore her memory, or at least be a part of her everyday routine. But vying for Lucy's attention isn't always easy. Sandler explores various approaches before making a video for Lucy to watch every morning, reminding her of who she is and what she's doing. The film includes a trademark Sandler ballad as Henry serenades Lucy with his ukulele and a series of familiar salacious puns. Rob Schneider plays Henry's best friend, a goofy native stoner whose physical hijinks earn numerous laughs. A cameo by Dan Akroyd as Lucy's doctor rounds out the cast.

Here's what you say about
50 First Dates / Big Daddy.