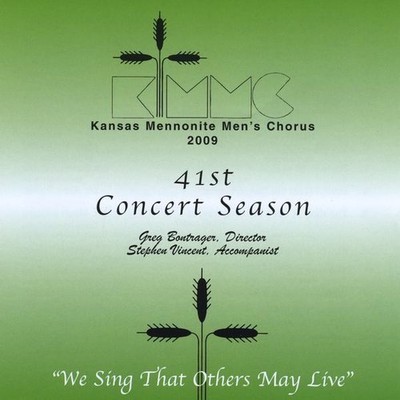 The Kansas Mennonite Men's Chorus began in 1969 with an initial membership of 140 men. For the 2009 season, membership topped 300. Offerings taken at KMMC are donated to the Mennonite Central Committee, an organization of Mennonite churches that provides world relief and does community development work. The singers pay for the music and other expenses, making it possible for all offerings to be channeled directly to the hungry of the world. All of KMMC's profits from the sale of this CD also go directly to MCC. Over the years, the Kansas Mennonite Men's Chorus has donated over $560,000 to charity. The Kansas Mennonite Men's Chorus presents two concerts each spring in Kansas. The group has also toured across North America and Europe. This album is a live recording of the KMMC. It is truly an amazing experience to hear 300 men singing these songs. KMMC members come from a variety of churches with the majority from 59 Mennonite churches representing eight Mennonite denominations in Kansas, Oklahoma, Nebraska, Colorado, and Missouri. The members represent a cross-section of ages and a wide range of occupations. Each member joins because of his ability and love for singing, enjoyment of fellowship, concern for the hungry of the world, and a desire to communicate the Christian faith through singing. Special note about Prayer of the Children by Kurt Bestor: From 1977 to 1979, Kurt Bestor lived in the former country of Yugoslavia. Living and traveling extensively throughout this beautiful land, Bestor learned to love the people of Croatia, Serbia, and Bosnia & Herzegovina. When the devastating civil war broke out there, he struggled with just what to do. There was no financial contribution to be made or opportunity to fight alongside his friends. Besides -- which side could he choose to be allied with? He loves them all equally. In a moment of frustration, Bestor sat at his keyboard and started humming a simple plaintive melody and with it penned the words, 'Can you hear the prayer of the children?' In a matter of a few hours, he had written the entire song. After singing it for a few friends and family members, Bestor put it aside, never intending to sing it again. Then, on a whim, he sang it in a concert. The response was overwhelming. At the end of the performance, the deafening silence followed by thunderous applause convinced the composer/performer that he would never perform again without including this special anthem. Prayer of the Children is unique in it's universal message, sacred yet simple melody, and haunting words. Today it's message is as pertinent as it was at it's conception when Bestor dedicated it to the children of the former country of Yugoslavia. Credits: KMMC Singers: 300+ men Menno Brass: Trumpets: Steve Hanneman, John Janzen, Arlin Buller Trombones: Dennis Schmidt, Stirling Schmidt, Andy Toews Other Instruments: Timpani: John Murray Flute: Vada Snider, Julie Krehbiel Harp: Rojean Loucks Open Road: Tenor I - Josh Powell, Evan Conrad; Tenor II - Kyle Unruh, Cameron Voth; Baritone - Caleb Stephens, Nathaniel Yoder; Bass: Austin McCabe-Juhnke, Alex Boldt, Michael Unruh Director: Greg Bontrager Piano and Organ: Stephen Vincent.