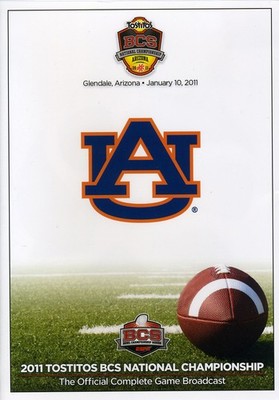 Gene Chizik, in his second season as Auburn's head coach, led the No. 1-ranked Tigers to victory over the second-ranked Oregon Ducks January 10th in the 2011 Tostitos BCS National Championship Game. At University of Phoenix Stadium in Glendale, Arizona, a record crowd of more than 78,000 watched as Wes Byrum's 19-yard field goal sailed through the uprights as time expired, earning Auburn a 22-19 win and it's second national title. Behind outstanding performances by Lombardi award winner Nick Fairly and freshman running back sensation Michael Dyer, the Tigers became the fifth consecutive team from the Southeastern Conference to win the BCS National Championship. With pre-game discussions centered around the fast-paced, up tempo Oregon Duck offense and the play-making abilities of Auburn's Heisman Trophy winner, quarterback Cam Newton, few would have predicted a scoreless first quarter. Less than one minute into the second quarter, the Ducks were on the board with a field goal. The Tigers were quick to respond as Newton connected with Kodi Burns on a 35-yard touchdown pass to take the lead 7-3. Two plays later, Ducks' sophomore quarterback Darron Thomas completed an 81-yard pass to receiver Jeff Maehl, which set up teammate LaMichael James' 8-yard touchdown catch. The Ducks converted the two-point conversion, providing a much needed spark for the Oregon offense. The Tigers reclaimed the lead before halftime with a safety and 30-yard touchdown catch by Emory Blake. On the second-half opening drive, Auburn extended it's lead with a Byrum field goal. Down 19-11, the Ducks battled back, capitalizing on a Newton fumble with James' second touchdown catch of the game and another successful two-point conversion. With less than three minutes to go in the game, Dyer delivered a 37-yard run, and four plays later, Byrum kicked his sixth career game winner - a fitting end to Auburn's magical 14-0 season. Celebrate the Tigers' BCS National Championship with the 2011 Tostitos BCS National Championship DVD, which includes the commercial-free game broadcast as well as special bonus features, making it a great addition to any Auburn fan's DVD collection.

Here's what you say about
2011 Tostitos BCS National Championship: Oregon vs. Auburn.