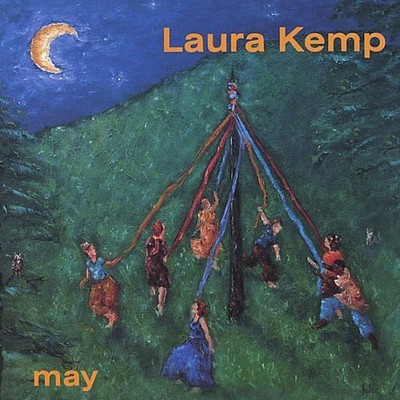 With the release of her eagerly anticipated fifth studio album, May, Laura Kemp has gained a reputation as one of the finest performers and songwriters on the west coast. Featuring an array of talented guest musicians, including Steve Smith on mandolin and mandola and Sally VanMeter on dobro, May is a skillfully and beautifully assembled song cycle. Nearly all of the songs have something to do with land, the seasons, love, gardening, relationships, or life choices. Some tracks, like Sword Ferns and Salmonberries, are beautiful in the simplicity of the arrangement (just voice and banjo); others, like Snow Returns, are intoxicating in the rich tapestry of sounds they weave from multiple instruments. The quality of the performances, the depth and range of emotion and experience conveyed, and the beauty and power of her well crafted songs make this her finest album yet to be released and sets a new standard for a Rain Water Records recording. Since 1990, she has been a fixture on the Eugene, OR folk scene. She has performed in a number of configurations over the years: captivating Northwest audiences as a solo artist, her unique brand of acoustic poetry earning her comparisons to Bob Dylan and Nanci Griffith; playing to sold out audiences at the W.O.W. Hall as part of Eugene's power girl group, Babes With Axes; as the front person for the Laura Kemp Band, with Brian West and T.R. Kelley on drums and bass; as the host of a writers in the round at Sam Bond's Garage, along with Eugene's folk treasure Peter Wilde; at the historic Inn of the Beginning in Cotati, CA with members of the Bay area's Little Big Band; on the Main Stage of the Oregon Country Fair with Mare Wakefield and T.R. Kelley; or paired down as a duo with Memphis player, Roy Brewer on fiddle and mandolin. A guitarist since the age of 8, she began performing while living in Germany in 1987, playing cover songs in Irish pubs and busking in the streets. Her musical style is not one to be pegged down, though it is largely rooted in folk and influenced by her time spent living in Nashville and North Carolina. She uses multiple capos, open tunings, flat picks, travis picks, and has a right hand technique that drives her songs with a sometimes angst-ridden edge. Her years of vocal lessons and singing in choirs are apparent in the strength and wide range of her powerful voice. Her dynamic performing style, refined confidence, and uncompromising frankness on stage have earned her 'Favorite Female Performer' honors at the WOW Hall in Eugene, 'Best Musician' from the Eugene Weekly, 'Best Local Band/Musician' from In Town, and 'Queen of Eugene Folk' by the Statesman Journal, Salem. The Willamette Week (Portland) says 'the singer and guitarist plays with a breadth rarely found in regional acts, picking the strings of her acoustic guitar with an earnestness befitting her emotional delivery.' When she is not touring, writing, recording, or teaching guitar, Laura keeps her hands dirty in her organic garden or has a backpack on her back, exploring the mountains of the great Northwest.

Here's what you say about
Laura Kemp - May.