Pete Levin - Masters in This Hall: The New Age of Christmas 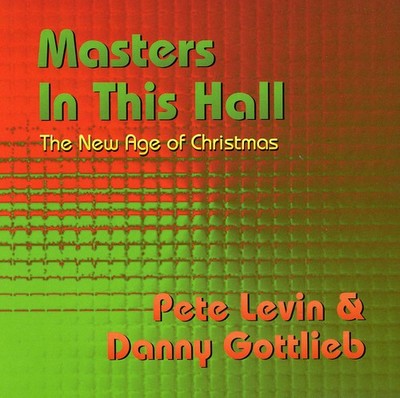 MASTERS IN THIS HALL features Adult Contemporary Jazz treatments of 12 holiday favorites, each one a unique arrangement and orchestration that reflects the spirit and energy of the song. Performances, drawing style influences from Jazz, Gospel, Classical and Latin music, are by Pete Levin and Danny Gottlieb, two veterans of the New York Jazz scene, internationally known for their work with many Jazz and Pop artists. Originally recorded in 1990 and released on Gramavision Records, this CD got extensive airplay during the 1990 holiday season, but had distribution problems and was difficult to find. Gramavision folded a year later, and MASTERS became an unavailable collector's item. In 2001 Pete retrieved the orchestrations from the original MIDI files and digital drum tracks and remixed them to create this reissue. Included on the CD are two 'bonus' tracks, remixes of two songs from Pete & Danny's first Christmas CD, 'THE NEW AGE OF CHRISTMAS'. REVIEWS They bring holiday songs up to speed with technofied readings - great for hearing old favorites in very new ways. Urban Network Magazine November, 1990 Merging Christmas music and Jazz seldom make for excitement; But 'Masters' has a different vision and sense of adventure. Jazz Times Magazine November, 1990 ARTIST BIOS Pete Levin Keyboardist/composer Pete Levin has been in the New York music scene for more than 30 years, recording and performing with Jazz and Pop artists including Gil Evans, John Scofield, Jaco Pastorius, Lenny White, David Sanborn, Tony Levin, Sting, Jimmy Giuffre, Paul Simon and Annie Lennox. While majoring in French Horn at Juilliard, he started gigging with Jazz and Rock groups around New York on Hammond Organ, eventually working into the recording scene as a multi keyboardist. In 1974 he got a call to play French Horn with the legendary jazz arranger Gil Evans, an association that lasted 15 years. One night, Pete brought a Moog Synthesizer along to an Evans gig. Gil loved it and Pete's role in the band was permanently changed. As Pete's developed his skills with electronic instruments, music production techniques were changing too, and he found himself a sought after 'programmer' - an orchestrator who works with computer-controlled synthesizer sounds. The combination of Pete's eclectic music background and electronic skills have landed him on hundreds of recordings and film scores. Pete released 3 solo albums for Gramavision Records: PARTY IN THE BASEMENT, A SOLITARY MAN, and the original release of MASTERS IN THIS HALL, while leading his own band, 'Don't Ask', featuring reedman Alex Foster and bassist Jeff Berlin. He is currently keeps a studio in Woodstock, New York, and tours with The Brubeck Brothers Quartet, Trio3 with guitarist Mike DeMicco, and blues singer Roxy Perry. Danny Gottlieb For many years one of the best-known drummers in Jazz and Jazz Fusion, Danny has performed with world - acclaimed artists like Sting, Pat Metheny, Gil Evans, John McLaughlin, Stan Getz and Al DeMeola. A past winner of Modern Drummer's readers' poll as best electric jazz drummer, Danny has been featured on the covers of Down Beat and Modern Drummer. Growing up in New Jersey, he studied with the legendary drummers Joe Morello and Mel Lewis. After graduating from the University of Miami, he joined Pat Metheny's original group that featured bassist Mark Egan and keyboardist Lyle Mays. In 1982 Danny and Mark formed their own group, Elements. Today, after 10 albums, Elements continues to record and perform. Also in the 80's, Danny joined the legendary Gil Evans Orchestra where he and Pete Levin first played together. For years they performed at the group's famous Monday-night engagements at Sweet Basil in New York, toured and performed on live recordings with the band. Danny has recorded two solo albums for Atlantic, AQUAMARINE and WHIRLWIND. Currently he keeps a busy schedule as a studio sideman and drum clinician while touring with Elements and the Blues Brothers.

Here's what you say about
Pete Levin - Masters in This Hall: The New Age of Christmas.