The Televangelist and the Architect - Mass Exodus from California 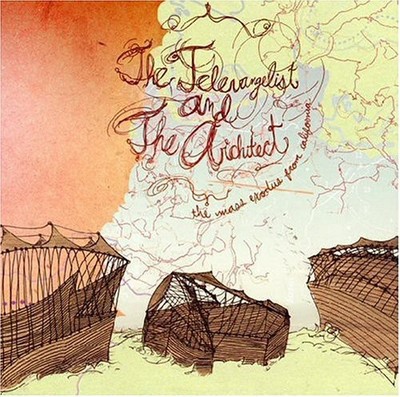 'The Mass Exodus From California is the debut from The Televangelist and the Architect, the new project of Jerry Chen, former leader of Bay Area indie rock trio Grand Unified Theory. Whereas Grand Unified Theory traded in angsty guitar explosions and frenetic energy, The Televangelist and the Architect shows a remarkable knack for tasteful instrumental arrangements and mature melodic craftsmanship. The Mass Exodus From California, whose title is an obvious nod to Chen's departure from the Bay Area to Boston, is an ambitious work of surprising emotional and musical depth. 'The Road Converges Up Ahead' opens the CD with a meandering, soothing organ and guitar-driven melody. Chen's fragile vocals break in halfway through and lead the song into mid-tempo musical territory that's almost more Classic Rock (in a Neil Young or Wilco way) than punk or indie rock. 'A Footnote To A Romance (Moving On)' adds a mellow, almost subdued Modest Mouse feel with slippery steel guitar and gently winding lead lines. The real gem on The Mass Exodus From California is the exceptional, layered 'The Birth of A Salesman', which opens with Chen level-testing a mic and quickly moves into a muscular, driving rhythm punctuated by guitar downstrokes and simple, perfect drumming. As the song builds, a strong melody and solid vocal performance are embellished with small flourishes of background vocals, handclaps, car horns, and a doorbell. This is the track that, as soon as if finishes, you'll press the repeat button. Much of the rest of the CD is melancholy and subdued, from the cello and bells on 'Corners/Fingers' to the countrified Elliot Smith-isms of 'The Architects Song.' The massive, ocean breeze-filled gap in the middle of '...With Resignation' works better in theory than in practice, but Chen rewards the resilient listener with one of his finer melodies when voice and guitars return at the 10 minute mark. It's probably fair to assume that not many people have heard The Mass Exodus From California and that's a terrible shame. Quite simply this is one of the better under-the-radar releases that I heard from 2004. Be on the vanguard, go to the Undetected Plagiarism website and pick it up.' -rooney bluemag.com.

Here's what you say about
The Televangelist and the Architect - Mass Exodus from California.

1) The Road Converges Up Ahead
2) A Footnote to a Romance (Moving on)
3) The Birth of a Salesman
4) Corners / Fingers
5) A Televangelist's Song
6) The Architect's Song
7) Musings from a Second Generation Immigrant
8) A Planned Mistake (Moving Up)
9) Some Parting Words (Moving Out)
10) ... with Resignation