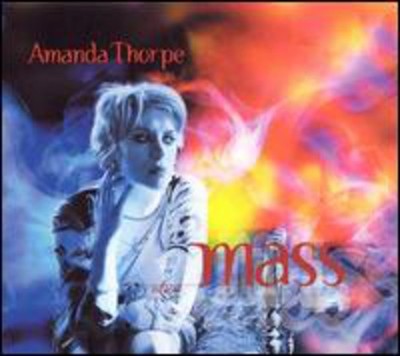 High Bias Review by Michael Toland. ' Amanda Thorpe brings the concept of the chanteuse into the 21st century with Mass. There's a smoky, intimate ambiance to this record, as if the studio was moved into a nightclub with a very large tab set up for the participants. Thorpe runs her jazzy folk/pop songs through a variety of electronics-tinged textures, bringing upbeat pop songs and seductive balladry under the same darkly romantic umbrella. Held together as much by Thorpe's versatile singing as by her love noir vision, Mass silkily moves through the crowd with a drink in one hand, the other lightly brushing your shoulder as it passes by. For fans of: Jane Siberry, Holly Palmer, Joe Henry From artful storytelling to the pulsing rhythms and languid beauty of trip-hop, the music of Amanda Thorpe is never easy to pigeonhole (though it tends to lodge snugly in the subconscious). While staying true to her strong sense of melody, Amanda's smart, often intensely personal songs with roots in folk and jazz subtly challenge our expectations of familiar forms. Her influences are as diverse as haunted British pop-poet, Nick Drake, and the sultry Francois Hardy, to guitar-god and wordsmith Richard Thompson, the Velvet Underground and Blondie. Amanda's EP, 'Too Many Spirits,' is a collection of deceptively simple folk-pop tunes that highlight her poetic and harmonic sensibility. Spirits' songs range in mood from romantic exuberance to jazzy melancholy. A unique voice in the crowded cosmos of downtown performers, Amanda's entrancing new CD, 'Mass,' again displays her powerful and haunting vocals over a sonic landscape laced with trip-hop and dreamy textures. As was recently noted in Variety.com, Amanda's vocals 'balance brassiness and vulnerability with panache.' While the song 'Always' resembles an ultra-hip interpretation of a 1940s nightclub standard, the sing-along guitar pop of 'Splinters' and coffeehouse intimacy of 'Toy Guitar' reveal an artist who moves confidently between the traditional and the modern. MASS features New York musicians: Knox Chandler (Psychedelic Furs), Joe McGinty (The Losers Lounge), Peter Stuart (The Headless Horsemen, Wirebirds, the Richard Lloyd band), and Tony Scherr (Norah Jones, The Lounge Lizards, Bill Frisell) who also engineered album track, 'Them There Eyes.' Influences: Dusty Springfield, Francois Hardy, Marianne Faithful, Nick Drake, The Velvet Underground, Blondie, Joe Henry, Jane Siberry, Death in Vegas.

Here's what you say about
Amanda Thorpe - Mass.