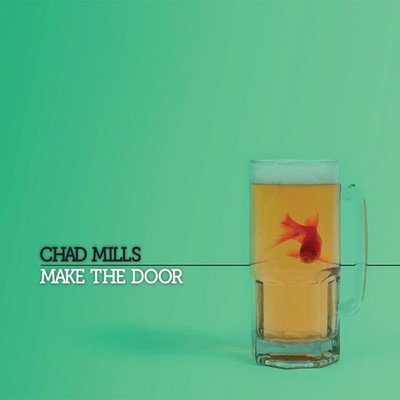 When Chad Mills sat down with the engineer / owner of the newly constructed RePo Records studio in 2008, he had no idea what he was in for. He had a vision of the record he wanted to make, but path to get there was uncertain. So the two went to work. Starting out with simple 2-track (guitar/vox) arrangements of the songs Mills wanted on the album, the roadmap to 'Make the Door' began to unfold. With an engineer just getting used to his new digs and an ambitious singer/songwriter in unchartered territory, the process was a learning experience for both. Progress at first was slow, and there was no shortage of mistakes and 'do-overs'...but the two stayed the course, determined to reach a good place. This is Mills' seventh independent release, four of which have been essentially guitar and vocals only. It wasn't until his 'Spring In My Eyes' EP (recorded in 2005 at Echo Park Studios in Bloomington, IN) that percussion was even used. Then in 2006, the vision began to grow. He went to his friend and owner of The Utility Room studio in Indianapolis, and told him about the album he wanted to make on a small budget. The result was a 10-song album called '2 Places @ Once' which received widespread praise from fans and critics alike. This was the first time Mills had incorporated bass and drums on a number of the tracks. Other instruments such as electric guitar, mandolin and violin made this work head and shoulders above anything he had put out in the past. When it was time to begin work on the follow up to '2 Places @ Once,' Mills knew the bar was now set. Having written scores of songs since the last release, there was a lot of material to choose from...but he knew he only wanted the best. So he began to whittle the list until 16 tracks remained. These 16 'stories' would make up the next Chad Mills album... Mills brought in a virtual 'who's who' of the local music scene to contribute their talents to the project. The result was a bold new sound for the usually conservative songwriter. Boasting sounds from cello, lap slide guitar, trombone and piano, this presentation of songs is unlike anything Mills had previously release. Each song powerful and gripping in it's own right. There are songs about love. There is a 'Hymn' that is a desperately melancholy cry of lonliness & despair. You can find on his canvas shades of folk, country, rock & even soul. The track 'always happens like this' feels like a virtual tent revival!! The album's title track closes out the disc. A song depicting what it's like to play music in his hometown of Indianapolis, Mills opted for a live recording of 'Make the Door' to capture the feel of his live performances. Chad Mills has been written up in the Indianapolis media as one of the city's finest songwriters. Building on that craft, he has managed to assemble a cast of musicians that have...as he describes it, 'turned these songs into theatre.' He believes in what he does, and he takes it seriously. Just listen to him sing. Hear his voice. In his words, you will find experience and emotion. In his voice, you will find sincerity and passion. He is, without a doubt, in it for the music. And for that, it is worth a listen.

Here's what you say about
Chad Mills - Make the Door.