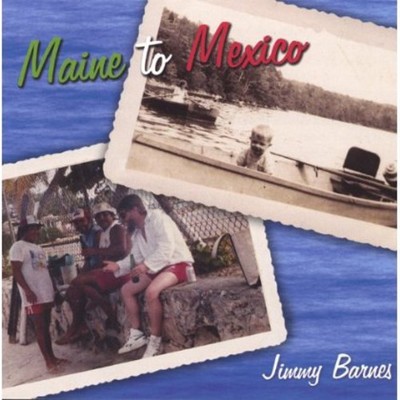 Jimmy Barnes is about as local as it gets in Downeast Maine. He was born in Ellsworth and was raised first on his grandaddy's farm in Mariaville, where he makes his home today. After graduating from Ellsworth High School, he ventured out into the world, making stops in New York City and Chicago. He ran deep-sea fishing boats in Bar Harbor, crew boats to the oil rigs in Louisiana, fished commercially up and down the coast and always played the guitar and sang, first in rock and roll bands, then later playing country music. He graduated from the University of Maine at Machias and eventually went to work for the U.S. Fish and Wildlife Service. In 1997, by chance, Jimmy wrote a Christmas carol called 'Downeast Christmas.' Although he had written songs for years, they had never made it past his memory and the listening enjoyment of a select few. However, at the urging of friends and family, he approached a local radio station about playing it at Christmas. The tune hit a nerve with Downeast listeners and was soon packaged up by many of them and sent to those friends and family who had moved 'away.' Jimmy followed that first recording of 'Downeast Christmas' with a full-length album called 'Fishin' for A Livin.' The next year's project was called 'Country and Eastern.' In 2002, he released a full-length original Christmas album entitled 'Old Sailor's Christmas.' Jimmy's latest album, titled 'Maine to Mexico' has just been released in the summer of 2005. In all of Jimmy's lyrics, he strives to convey what he feels are the strong, independent spirits and views of Mainers. He was invited to sing for past governor Angus King and his wife, Mary Herman at the Blaine House and has entertained at a global fishing safety conference in Woods Hole, Massachusetts. His songs have been played by a national community radio station in California and continue to be played in the state of Maine due simply to the demand from listeners.

Here's what you say about
Jimmy Barnes - Maine to Mexico.