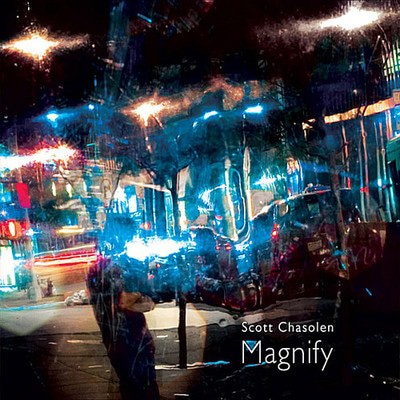 Scott Chasolen was raised in Wayne, NJ and accidentally began playing the piano by ear at twelve years old. By the time he was 16 he was already performing in clubs in New York City and studying jazz. With a passion for improvising and composition, he later attended New School University in Manhattan while maintaining a hectic lifestyle of creating, touring and recording with the successful instrumental group ulu. For 7 years he traveled the countryside from Maine to Texas and every point in-between, clearly marking his own place within the jam circuit, not to mention developing a stage presence that can reach the nosebleed seats in a small stadium! The use of vintage keyboards such as the Fender Rhodes, Hammond organ, Hohner clavinet and Moog synthesizer have helped to shape his distinctive sound live and on all four ulu albums. Along the way Scott has shared the stage with John Scofield, The Dirty Dozen Brass Band, Soulive, Mickey Hart and De La Soul to name a few. Scott has also honed a fine craft of songwriting, using an interesting blend of folk, rock and jazz elements along with introspective lyrics and his own heartfelt vocals. He reveals these abilities on his debut album, Solitude Speaks, narrating passionate tales of life through a unique perspective. In a recent collaboration with singer/songwriter Katy Pfaffl, the two have created a bold and boundless acoustic sound all their own. Their poignant and proficient styles intertwine on their album, 'Woven,' which was released in the fall of 2005. Currently, a new record is in the works containing some of Scott's most accessible writing to date. This collection of memorable songs is both prolific and profound, touching on subjects we all can relate to - childhood memories, sleepless nights, crazy girlfriends, self loathing, home sickness, spiritual growth, and of course the continuing saga of separation and love. Producer/engineer Rob Harari played a large role in the creative prcoess, as well as a cast of musicians including Carlos Alomar on guitar. 'Magnify' is rich in texture, driven by Scott's charismatic voice and prowess on the piano. A release date has been set for 3/07... The Scott Chasolen Trio can be heard playing music from all of the mentioned recordings in and around New York City at the Living Room, Rockwood Music Hall and the Knitting Factory. Along the way, in addition to touring and pursuing his own original music, Scott has performed and recorded with countless acts in the New York City area including The Machine, Stratospheerius, Illuminati, Katy Pfaffl Band, The Chesterfields, Topaz, Zen Tricksters, Robert Matarazzo, Suit of Lights, Michelle Citrin, Splintered Sunlight, Liam Goodwin and the Ramble, Waves of Life, Chris Berry and Panjea, Funk Monk, Tiberius, Alex Mitnick and the Kaleidescope Band and many small jazz ensembles...

Here's what you say about
Scott Chasolen - Magnify.