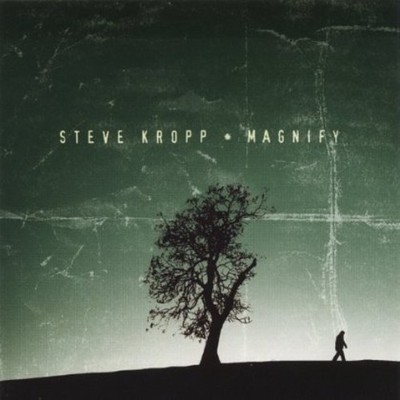 New to the contemporary Christian music scene is 27 year-old singer/songwriter Steve Kropp. Steve has been serving God for the past three years as a worship leader, focusing largely on youth events. His debut CD, Magnify, can best be described as cutting-edge, praise and worship music that is inspirational and reveals his intimate relationship with the Creator. Born and raised a Christian, Steve recounts a time when he was determined to find a way to best serve the Lord and His people. 'For me, music seemed to be a fitting outlet with which I could approach our pastor. Ironically, he was in the planning stages of starting a contemporary worship service. It was certainly a 'process', but since that day when I made that commitment to Him, His blessings have been pouring over me as a worship leader, musician, and songwriter. More importantly, He sculpted my heart to reflect Him and to seek to know Him more while encouraging others to do the same.' In an area of music that has recently had no shortage of singer/songwriters, Steve Kropp distinguishes himself with worship music that is similar in style to his musical influences: the Beatles, Dave Matthews, Pearl Jam, Howie Day, Jack Johnson, & Green Day. 'People these days say they listen to various genres of music...so when writing the album I took the approach of imagining I was writing worship songs for my favorite bands to perform.' Steve also notes that Chris Tomlin had a major impact on his view of worship music. 'I had always thought it was sub-par until I heard Tomlin. He blew me away because he was the first Christian artist that I had heard whose music ranks next to anyone up there at the top of the pop charts. So, he inspired me to write lyrics for the church, but music for the secular ear.' From the funk-based 'God of Glory', the country twang of 'Magnify', to the finger-picked ballad 'Never Forget', Steve achieved the varied sound he was striving for. As for singles, Magnify's first release is the pop-driven, 'Trinity Song'. Written out of a perceived lack of music glorifying God as 3 in 1, 'Trinity' devotes a verse to each and features a choir for background vocals on the final choruses. The second single, the acoustic-rock 'I Believe' declares it's author's awestruck faith, trust, and confidence in God. Steve confesses he has to give some credit to Wal-Mart for the worship anthem, 'Champion', which rounds out the singles. 'I was strumming a waltz pattern on the guitar one morning and noticed my poster of 40 some names of Jesus. I just randomly started singing different names and fitting syllables into this melody that seemed to appear out of thin air. Everywhere I play people seem to catch on to it, so it has to be the best $3.97 I've ever spent.' Steve currently splits time between touring and a staff position at New Season United Methodist Church, a church-plant in Massaponax, Virginia. He often utilizes humor to make his audience feel comfortable, but always creates an atmosphere of true communion with God. An all-star band comprised of area praise team members, backs Steve at most performances. When playing solo, he records live 'loops' to create instrumental backup. Steve Kropp's music ministry builds it's foundation on Psalm 34:3, 'O magnify the Lord with me, and let's exalt his name together.' He prays that you take the time to listen to the music with which God has so graciously blessed him. 'This music comes from Him, and goes back to Him.' Meanwhile, don't be surprised if you bump into Steve shopping for another hit at your local Wal-Mart... written by Gina Vitale.

Here's what you say about
Steve Kropp - Magnify.