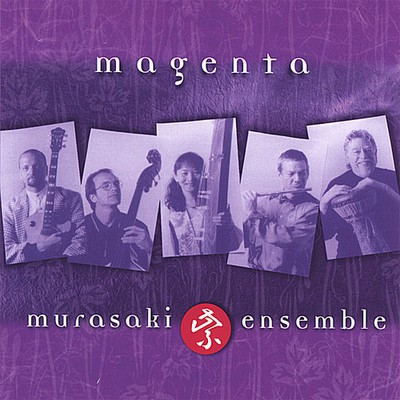 Magenta,the 3rd album by the Murasaki Ensemble, represents some of the best of this San Francisco-based world jazz fusion group. Shirley Kazuyo Muramoto, koto musician and the leader of the Murasaki Ensemble, brings together a fabulous group of musicians, each in expert in their own right: Vince Delgado on hand drums (riqq, tabla, congas, bongos, etc.), Matt Eakle-flute, Jeff Massanari-acoustic guitar and Alex Baum-upright string bass. Because of Vince's diverse background and love of playing odd-meters, he challenges the group to play crazy rhythms, such as in 'Nines Over Easy' and the traditional Japanese song 'Sakura' played in 7. Our 'hit' is 'Soyo Kaze', which made it on a William-Sonoma compellation called 'Good Fortune', and you may have inadvertantly heard it played as background music in novelty stores and elevators. Comments from critics and contemporaries: "...The CDs available by the group, while highly enjoyable, give only a taste of the expansive imagination and passion their concert appearance revealed. They have my vote as the jazz group most deserving wider recognition. I've seen one facet of the future of jazz, and it draws radiance from a rising sun in the East." (Norman Weinstein, All About Jazz.com) "...The Murasaki Ensemble eschews the melting pot and aims for the 'salad bowl' model of ethnic integration in it's music---continually shifting the spotlight between Shirley Muramoto's koto playing, guitarist Jeff Massanari's liquid jazz licks, and flutist Matt Eakle's soul-tickling reed action. Percussionist Vince Delgado directs traffic with congas, bongos, Indian temple bells, and Egyptian tabla and riqq at his disposal. Their willingness to step outside traditional technique makes for a lively give-and-go sound..." (Howard Myint, The San Francisco Bay Guardian)

Here's what you say about
Murasaki Ensemble - Magenta.