All the Queens Men - Madame Static 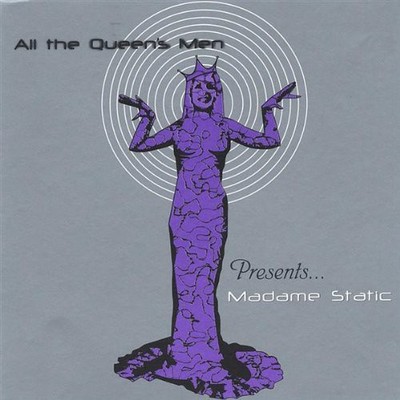 All the Queen's Men Presents: 'Madame Static' on Mad Monarchy Records Boston Globe: 'Combining tribal beats with astral tones, the band offers an all-encompassing buffet. And with it's closing pair of remixes included, this album is ready to go from the radio to the rave tent...' Meet Madame Static. She's all the rage. She's ultra modern, but still a little traditional. We think you're going to love her. Madame Static is the latest release from Boston's All the Queen's Men: Christine Zufferey, vocals, samples, keys; Catherine Capozzi, guitars, noise escapes; Christopher Farrell, bass; and Tamora Gooding, drums, percussion, drum loops. The album, which represents an exciting new musical direction for the five-year-old outfit, features eight tracks, including five new AQM compositions: 'You Want Me,' 'Fit the Dress,' 'We're the Same,' 'Azalaya' and 'Naha.' 'What we're trying to do with the music is bridge rock with electronic music,' Gooding explains. Gooding calls the musical blend on Madame Static 'rocktronica,' and adds, 'I think when you say that one word, it really defines what we're trying to do - and in what direction we're heading.' Produced by All the Queen's Men, Madame Static was recorded in the spring of 2001 at Electric Space Blanket Studios in Boston with Gooding and Zufferey engineering and mixing. Marc-Dieter Einstmann mastered the recording at Sonic Silver Studio. Besides the five new AQM tracks, Madame Static includes three remixes of 'Azalaya' - two industrial-style remixes by Bill T. Miller, who is well known for his work with Boston-area noise bands, and one remix by Hostage, a Swiss techno duo that includes Zufferey's brother, Andy. The lead track, 'You Want Me,' has been included in the soundtrack for the independent film, Role Play, which is currently being screened at film festivals across the country. All the Queen's Men will be touring extensively in the Northeast in support of Madame Static during the latter part of 2001 and into 2002. READ THE LATEST PRESS: Diva Magazine (UK): 'AQM are a splendido female rock band from Boston, who mix enigmatic vocals with scrawling Hendrix-style guitar and electronic techno beats.' NY Rocks: 'We're the Same,' for example, features sultry, sexy vocals from Christine Zufferey, and the way her voice moans, well, heck, I'd pretty much do anything she asked me.' The Noise:'....All the Queen's Men is a truly musically innovative and passionate band that consistently puts on an entertaining live show.' The Boston Phoenix Fall Music Preview supplement included a paragraph hailing Madame Static as one of choice releases for the fall 2001 Femmusic.com: 'One of the Top 10 Independent Bands of 2001! All The Queen's Men is an alternative band with a ferocious and risk-taking streak. Their CD, Madame Static pushes the listener in all directions from rage to heartbreak and back again.' Skope Magazine: 'Pulsing hypnotic beats. Exotic rhythms. Haunting, trance-like melodies. Hot sweaty bodies thriving on the rave enriched temptations of the ambient sound.' Metronome Magazine: 'Unusual and provocative, the band mixes sultry vocals with industrial rhythms that are tense and ethereal. .....Ingenius!'

Here's what you say about
All the Queens Men - Madame Static.