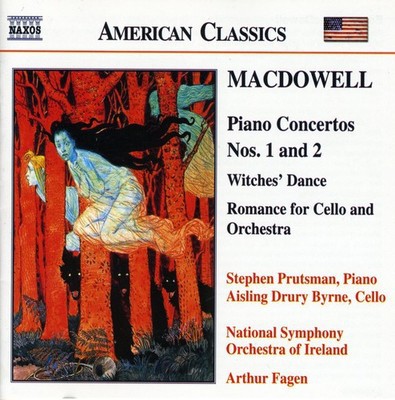 The first performance of the Second Concerto took place in Chickering Hall, New York on 5 March 1889 in a concert which also included the American première of Tchaikovsky's Fifth Symphony. One critic praised 'a splendid composition, so full of poetry, so full of vigor as to tempt the assertion that it must be placed at the head of all works of it's kind produced by a native or adopted citizen of America.' He claimed to have enjoyed it far more than the new symphony. The work was dedicated to MacDowell's old teacher, Teresa Carreño, whose colorful life included successful careers as a conductor and opera singer as well as concert pianist, while multiple marriages (including one to Eugene d'Albert) kept her name constantly in the papers. She would no doubt have approved of the unconventional structure of the piece. The first movement Larghetto calmato, for example, is actually the slowest with a shimmering, almost Wagnerian introduction, although it is swiftly interrupted by a flurry of virtuosic material for the soloist. The second is a fleet-footed, almost jazzy Scherzo and the third, after a slow introduction is actually, of all things, a high-spirited waltz. The Witches' Dance (or Hexentanz), originally for solo piano, is the second of two Fantasy Pieces, Op. 17 dating from 1884. It was one of the most popular of MacDowell's pieces: it exists in several versions and even found it's way into the encore repertoire of the great Leopold Godowsky. Later MacDowell became embarrassed by what he saw as the piece's 'flashiness' and shallow outlook, although he was still playing it himself in 1891. The little Romance for Cello and Orchestra, Op. 35, was written just before the MacDowells returned to America in 1888 and was dedicated to the venerable Austrian cellist David Popper. Even MacDowell's star-struck contemporary biographer, Lawrence Gilman, concedes that this is a slight piece 'though not without a certain rather inexpensive charm'.

Here's what you say about
Stephen Prutsman - Piano Concertos 1 & 2.